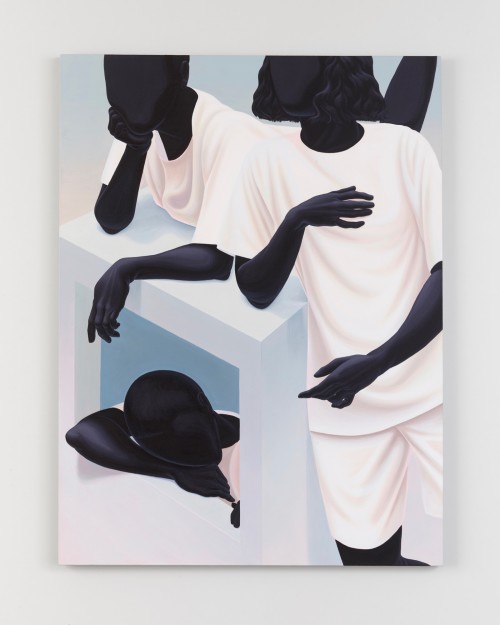 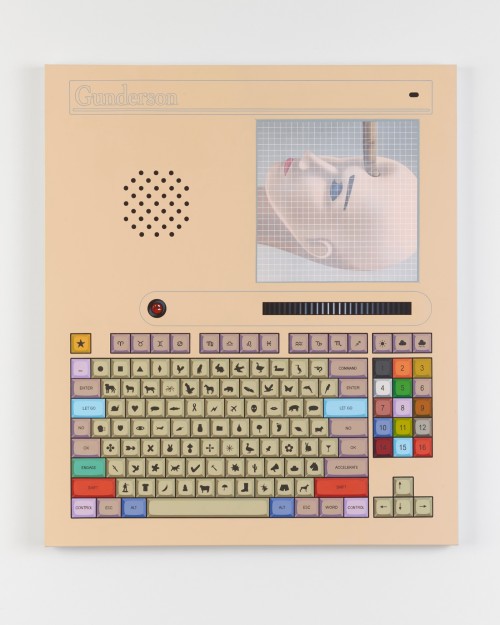 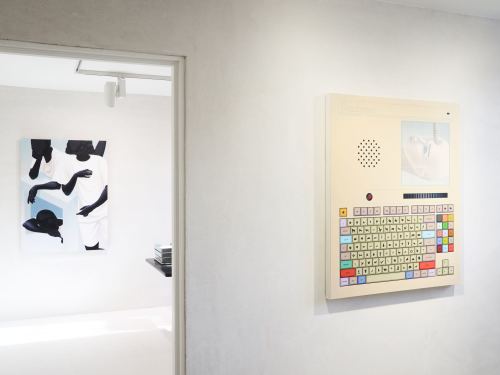 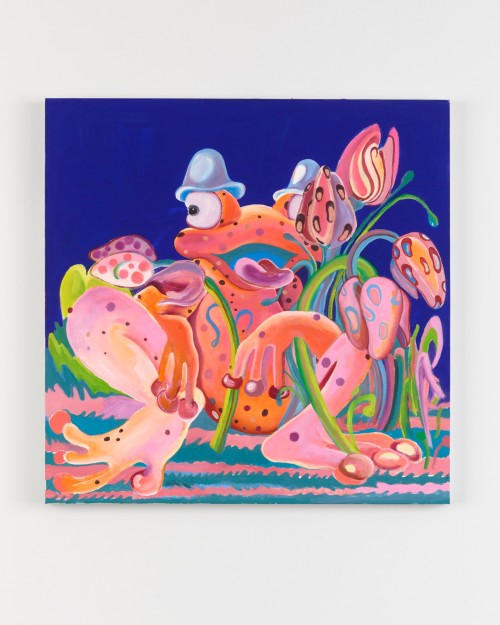 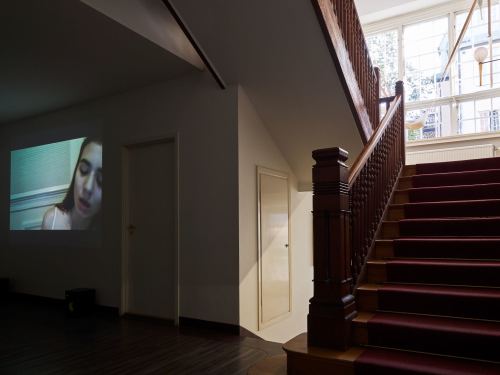 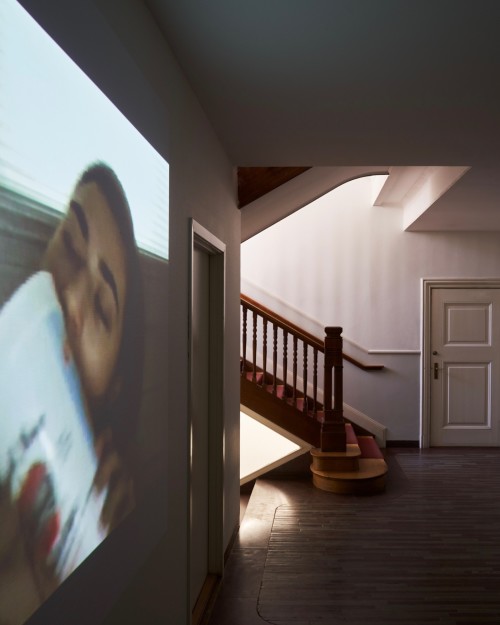 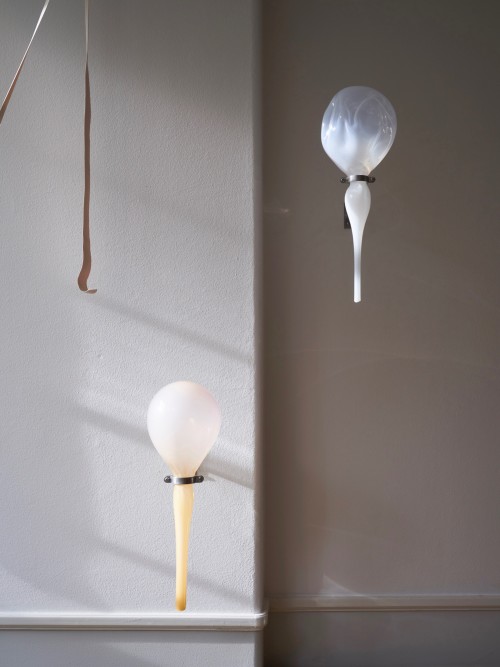 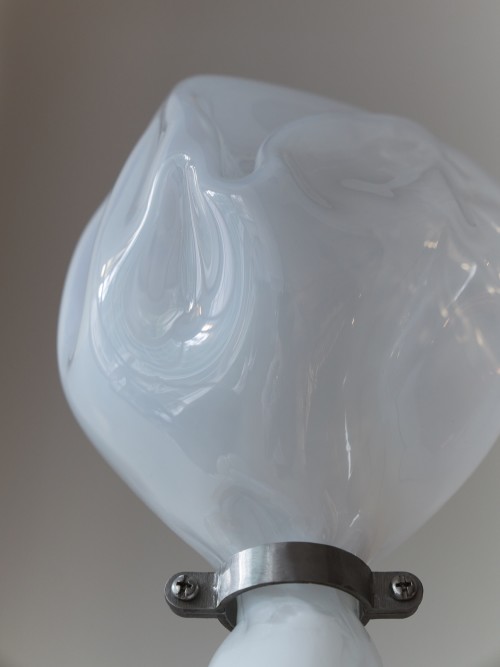 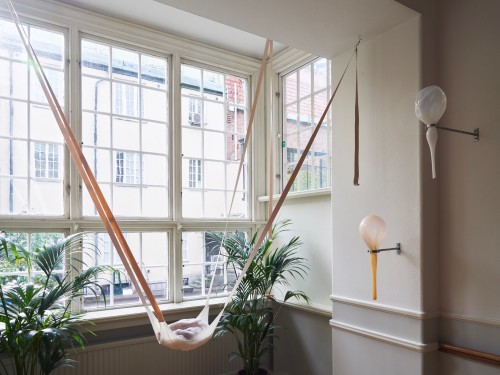 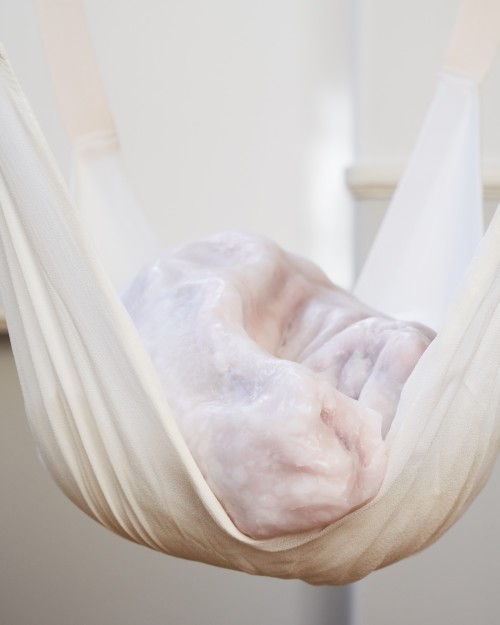 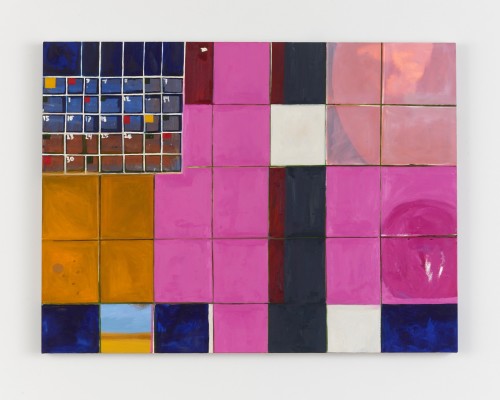 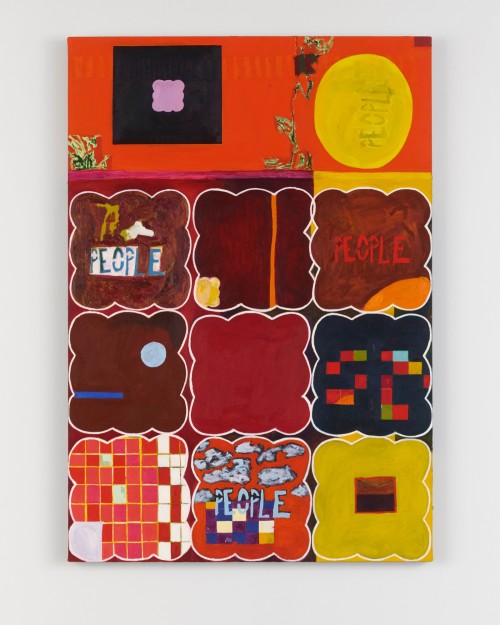 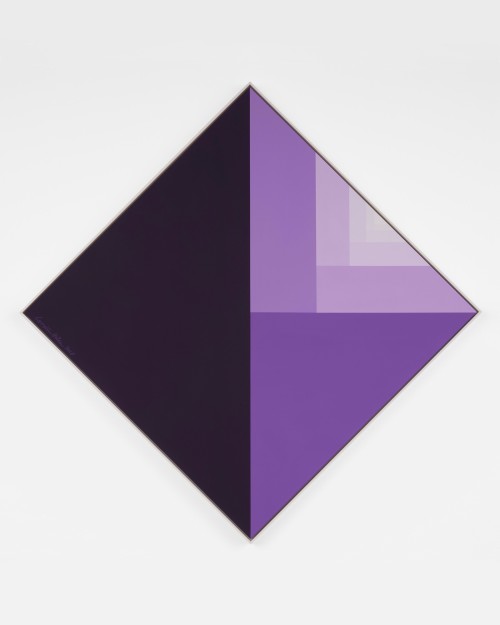 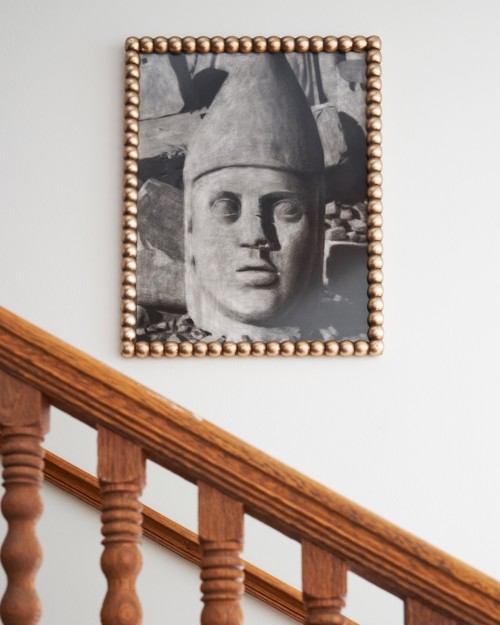 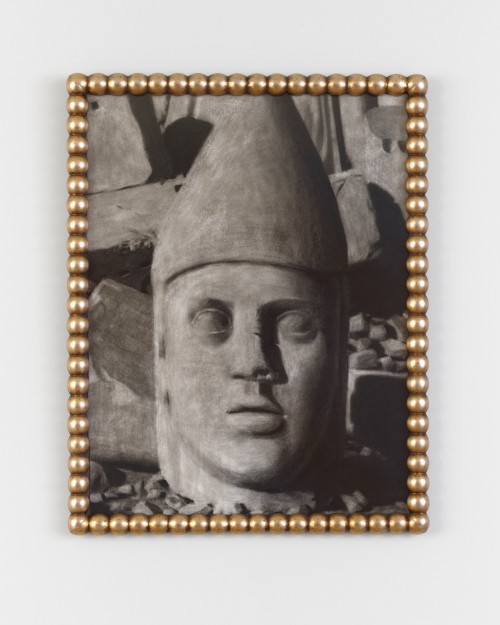 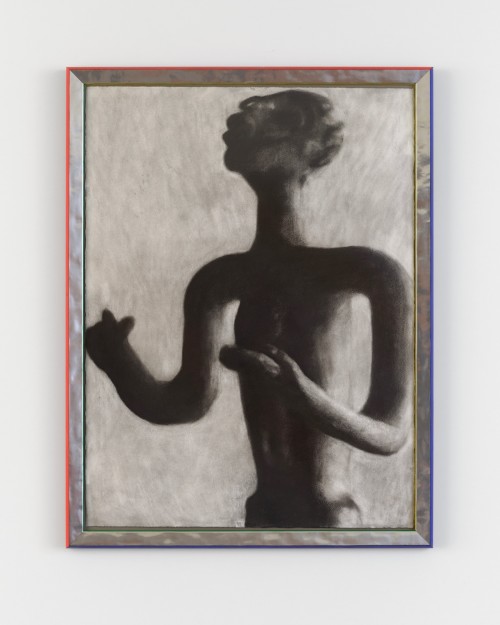 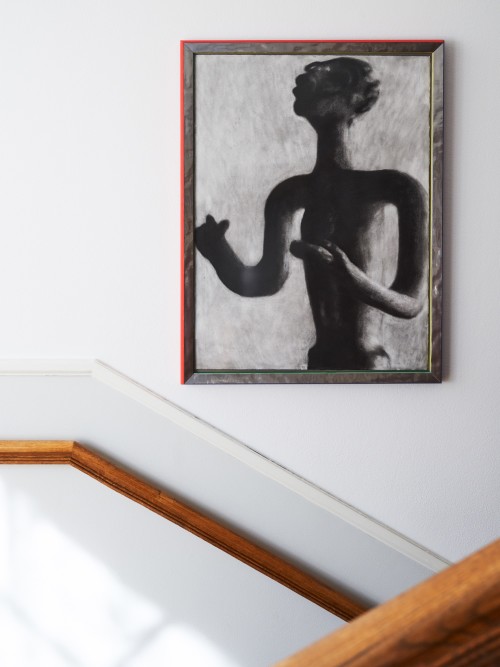 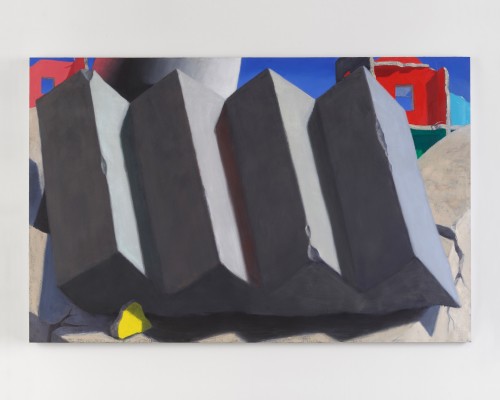 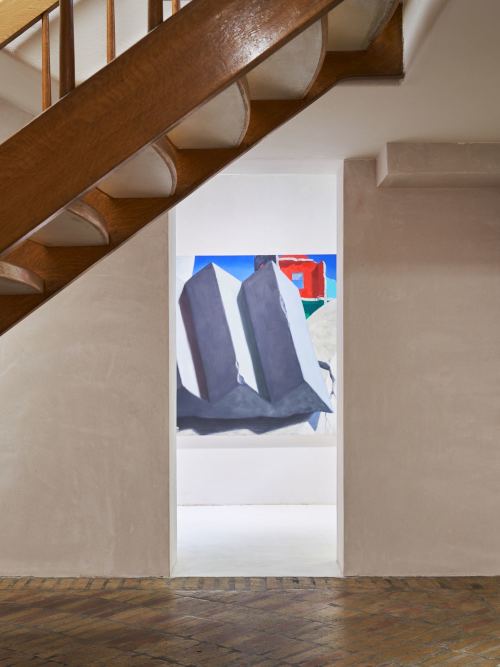 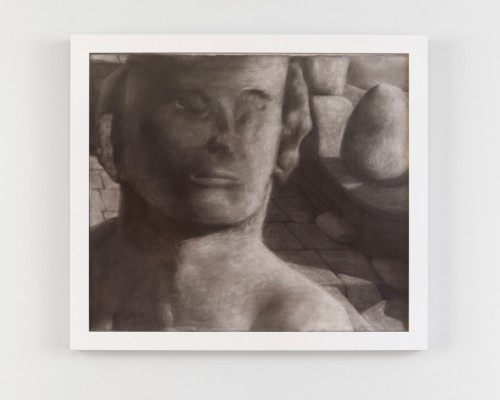 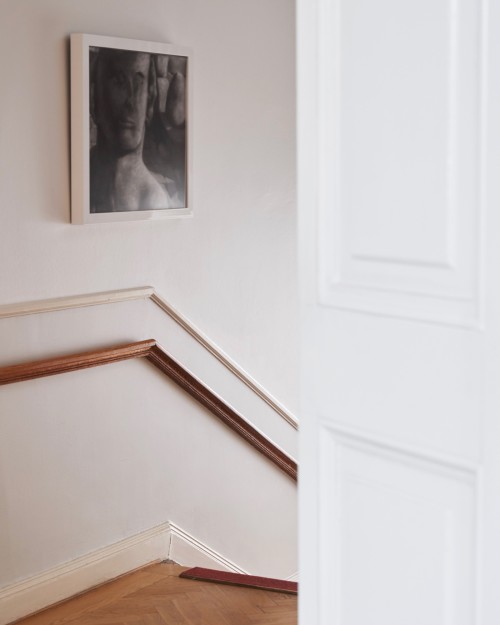 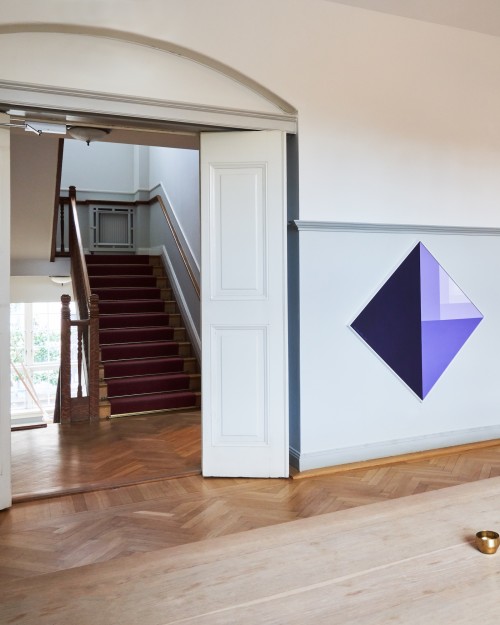 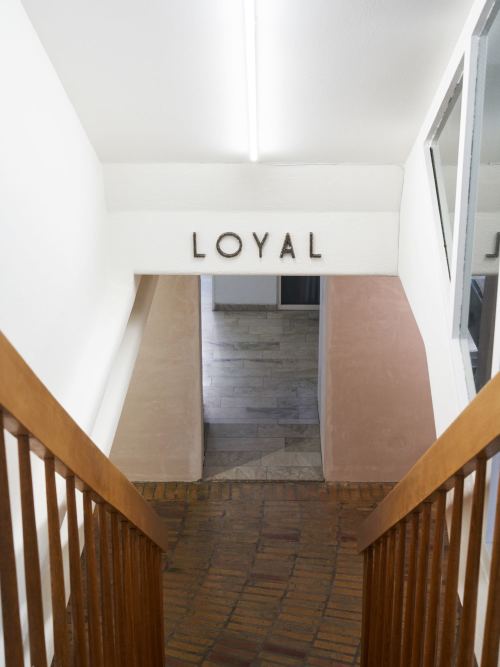 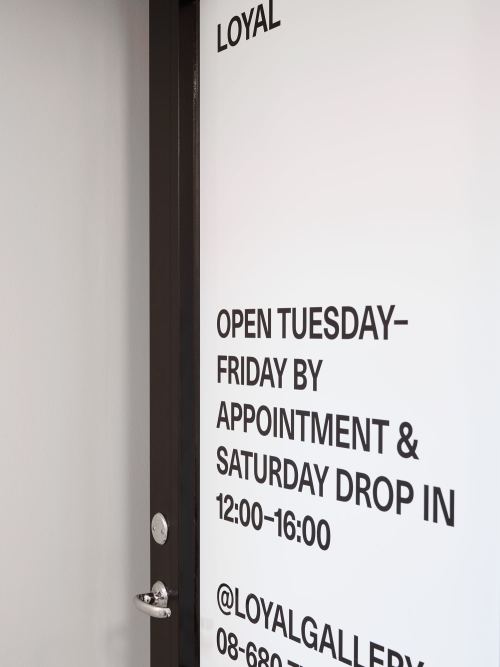 Alake Shilling is a self-taught artist based in Los Angeles. When we got to know Alake Shilling, she had been participating in the open ceramic studios at 356 Mission in Los Angeles, the art space and gallery created by artist Laura Owens. Central to Shilling’s practice, including both ceramics and painting, is the use of animal analogy. The works become loud renderings of the inner self, with exuberant color and humor to portray an entire spectrum of emotion.

Alex Gardner’s “In a Box” is depicting three figures set in an indefinable geometrical space. The facelessness of the subjects yet again suggests this sense of bodily ambiguity central as a theme to the group exhibition BODY, CURTAIN, ADVANCE. Gardner is leading the viewer into another realm, where our common ways of identification and reading emotion are no longer purposive. Interaction with and interpretation of the work must be carried out without relying on, for instance, gender identity, cultural identity or appearance. In the press release of “Guest room”, Gardner’s solo exhibition taking place at the SCAD Museum of Art, the spaces he creates are paralleled with the Foucauldian term “heterotopias”, there neatly described as “places that are elsewhere and that can represent several incompatible sites and times at once.” Heterotopias are indeterminable places channeling otherness. Gardner’s work proposes a question: why are many so alarmed by the idea of indefinable characters, concepts, spaces?

Henry Gunderson’s “The Programing Entity” is presenting a device to program humans to be robots. The finger is that of the programmer, which could be governments, corporations, institutions, mothers, fathers, artists, pressing your buttons. Have you ever seen or read the original Stepford Wives? Imagine they would use this instrument to code the
housewife robots.

Bunny Rogers, “Diary 2012-2014” consists of a sequence of 10 short videos. Shot up-close in web camera format, Rogers speaks to the camera in a lulling, monotone voice. The few details in the stripped-down backgrounds consistently indicate isolated, domestic environments, creating a sort of shared seclusion. The words she delivers, culled from her “Cunny Poems” from the years 2012–2014, are dark yet humorous, dynamically symbolic and straightforward, flickering between mild and explicit language. Drawn to immediate communication, Rogers originally posted the poems on her Tumblr, http://cunny4.tumblr.com. Rogers uses herself as a medium to articulate existential anguish in both playful and pragmatic ways. The narrative blurs the personal with the universal, memory with presence. At the centre of Rogers’ practice lie complex ideas about societal value systems, performativity, sexualization and the gaze as well as an interest in relief and trauma processing through collectivity and connection.

Bunny Rogers had a solo exhibition at the Whitney Museum of American Art during fall 2017, and at the Marciano Art Foundation in Los Angeles.

Ivana Basic’s mixed media installation in group show BODY, CURTAIN, ADVANCE consists of three separate works that together form an indication of humanity and its imminent as well as complex relationship to mortality and fragility. “Disintegration in the direction of something other than death #2”, from an ongoing series of suspended sculptures, is an enigmatic mass with a pale, translucent skin-like surface housing violet and blue micro vessels. The fleshy, sensitive wax material is intricately detailed, heavy with information. The weight capsulated inside enhances the contradictions of denseness, durability and frailty, vulnerability. Resting in a silk cloth which hangs from the ceiling by elastic straps, reminiscent of a sling, it is ambiguous on approach. On the very verge between exuding beauty and monstrosity its appearance is both intriguing and repelling.

Installed beside it, two light-as-air hand-blown glass sculptures ascend the wall. “Breath seeps through her tightly closed mouth #16” and “— #17”, represent respiration. The inhale is inflated, vigorous in a flushed pink tone, while the exhale is deflated and achromatic. Together the works articulate the duality of both material and subject matter present throughout Basic’s practice; the self being both dependent and confined by the human form, the eternal force of life reproducing itself and the inescapable expiration of energy. Ultimately Basic constructs something beyond impermanence, by converting the symbol of the perishable corporeal into something more enduring.

Recently having two works acquired by the Whitney Museum of American art, we want to congratulate Ivana Basic on being included in their permanent collection.

Marisa Takal’s calendar paintings deal with the monotony of day to day life, and the anxiety of trying to make plans with an already packed schedule. “Open Processing 1” is a vibrant but completely blank agenda, an open field of rough, geometric pattern and strong color. The calendar is surreal and humorous in its emptiness, entrusting the comicality in that being free from either work, emotional labour, school, appointments or chores is such a rare state, basically abnormal and non-existent.

Takal relies on vulnerability and intuition in her practice, with an aim to paint without inhibitions. Her works mix divergent modes of representation and rebel against the traditional rules of color and design.

The use of division is reoccurring in Carsten Höller’s work, here challenging logic and perception through a well calculated appearance of infinity in the form of a disciplined pattern. In “Divisions Square (Egyptian Violet Surface)” hues of purple recede in halves, following a scheme which controls both color intensity and proportion. The individual parts of the work become an entity, complete due to the fixed dialogue between them. Höller has premeditated a formula which steers the process in an almost deterministic fashion, rather than it being dependent on creative decisions to progress.

“I like the picture to be something where you can’t imagine what happened right before or right after. It’s not like a still from a movie. It’s an object – an end in itself.”
– Jordan Kasey

What characterizes a body? Is it its physicality, lengthiness, heaviness? Is it dependent on you as a conscious being, reacting to it with your senses, to be defined? Jordan Kasey’s painting and drawing practice is centralized around the abstracted body, vaguely suggesting but never fully revealing itself. Her charcoal renderings of stone faced sculptures are figures frozen in time, from a world perished by its unconditional evanescence. Fluidity is contrasted with a strictness in motif – Kasey likes for all elements to point to the specific main event of the piece, whatever it may be. This kind of straightforward, polished immeasurability creates an urge to rather experience the works by touch than with mind, which is evidently impossible. In Kasey’s four pieces presented in BODY, CURTAIN, ADVANCE sculptures and ruins are for a split second brought to life, disarranging the qualities of time, dimensionality and body.