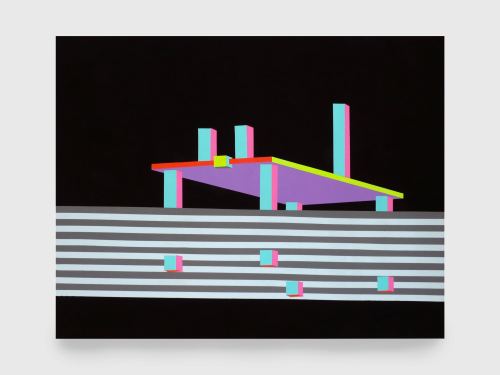 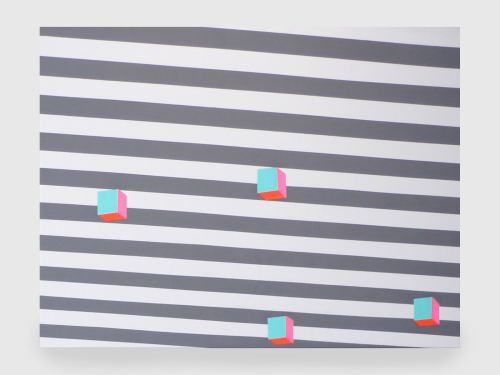 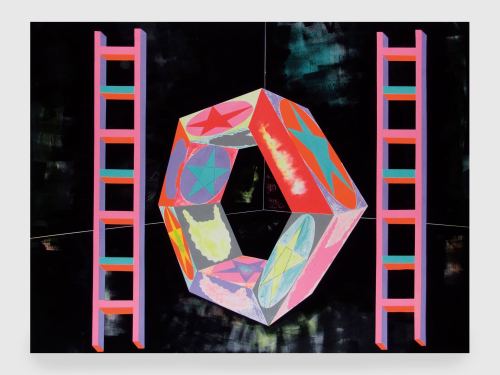 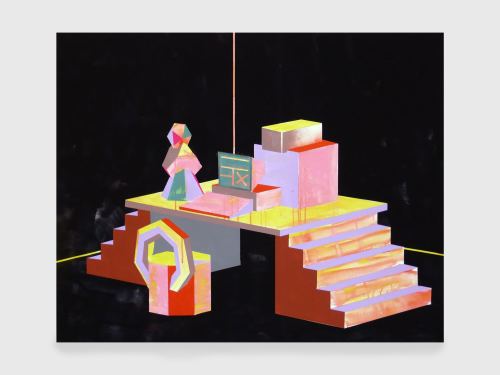 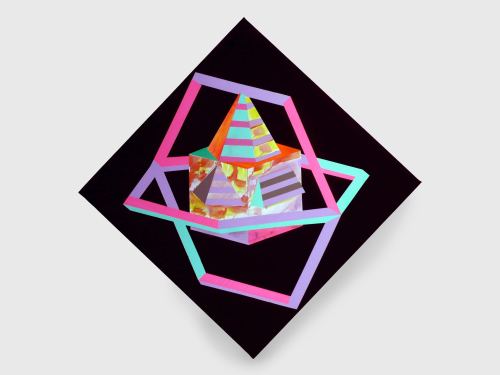 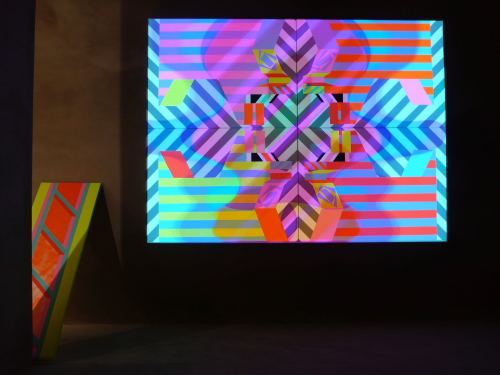 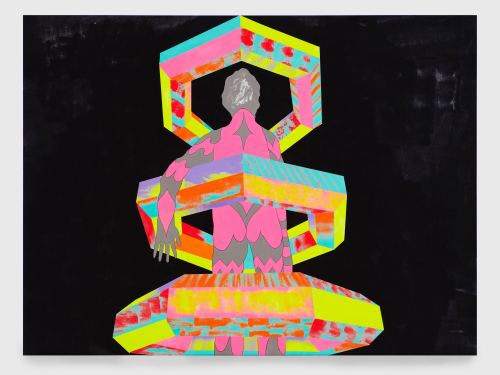 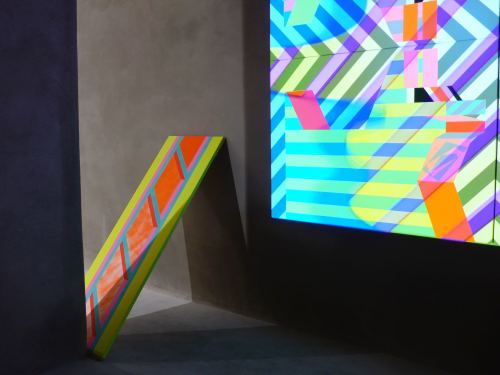 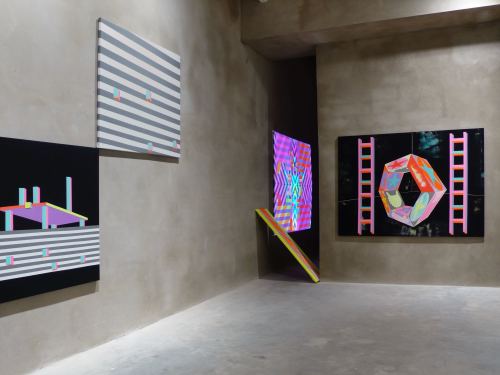 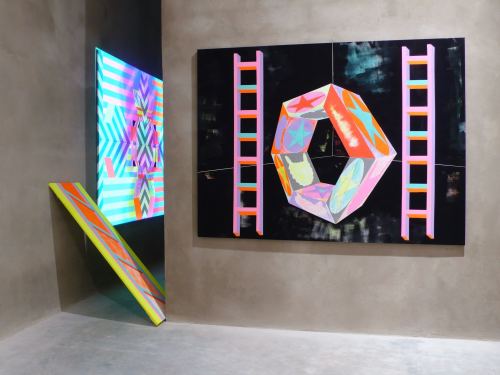 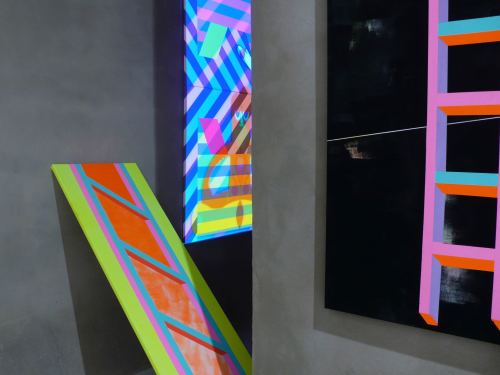 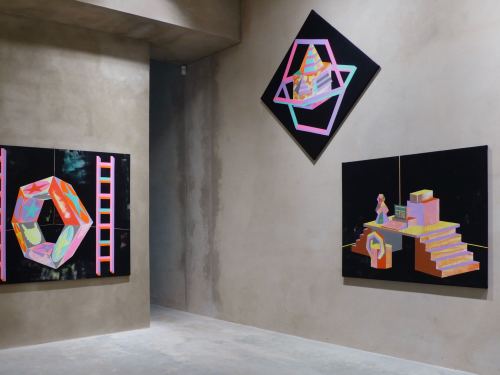 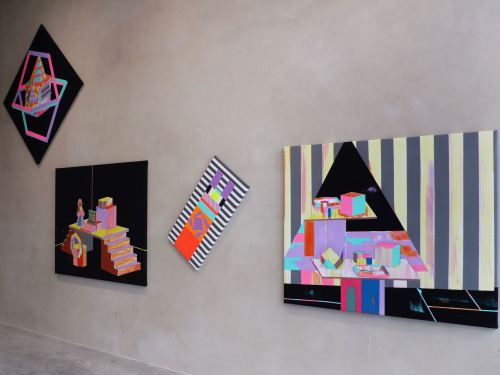 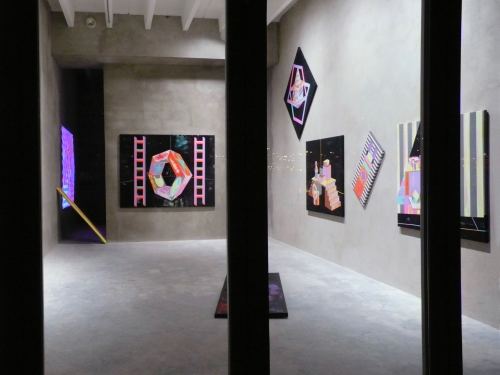 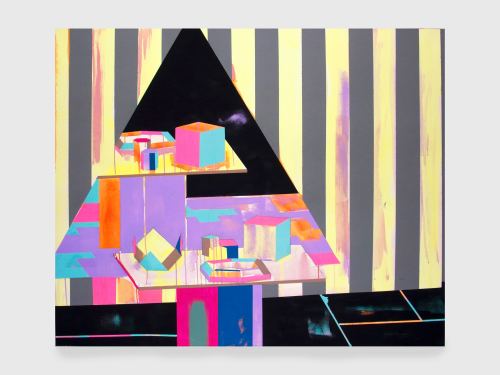 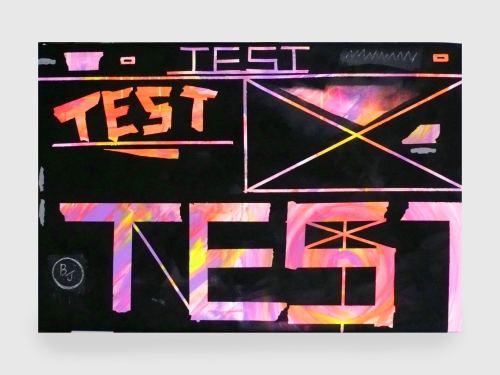 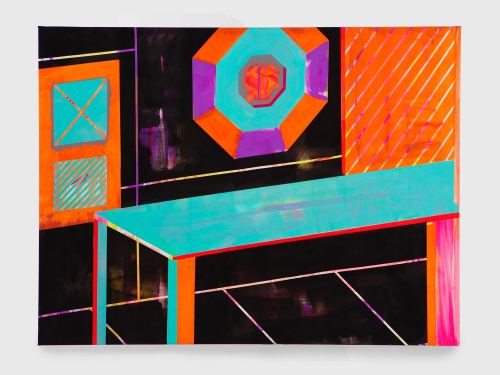 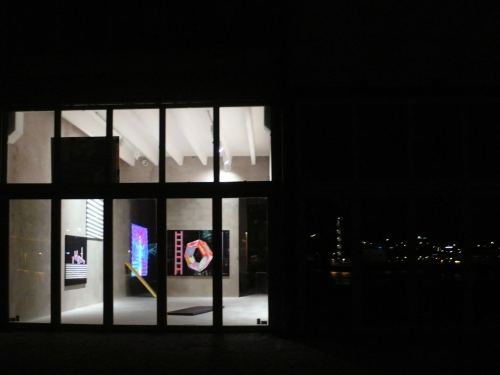 With a new series of painted canvases, American artist Ben Jones has today created the exhibition Concept Unification for the art gallery Loyal in Malmö, Sweden.

This new group of Concept Unification paintings exist in rooms and spaces with multiple levels. We can see a room as a space for exploration. Tables are set forth for experimentation suggesting problems to solve before reaching the next level. A quest for advancement and lucidity. The imagery is intended to work on many levels, crossing from reality into the imaginary, or rather from one level of reality into another, much like when advancing from one level of a video game to the next.

The paintings seem to have been born in a retro-technological Tron-like computer rendering universe. Ben Jones is known to combine elements of sculpture, painting drawing, video and digital in single work. In his ”video paintings” his own complex animations are projected on a static canvas of geometric shapes and morphing figures. Creating a work that on a whole creates a tension between the static and kinetic and suggests a space that exists beyond the limits of the canvas.

Jones’ own color and shape shorthand developed to be consistent and define representation of a form, just enough to read it as an object, refers to the use of the object. Ladders climb between worlds. Tables, a surface for research and development of ideas. Dogs are cute and loyal companions on a journey, and also can be seen as comical symbols and willing abettors. Not to get stuck in a pattern continually. Find ways to push forms forward. Symbols are drawn from various sources, a mash up of minimalism and 80’s video games, pulling in references from all over the cultural capital.

Ben Jones is a perfect example of the innovation, inspiration and determination that exemplify America’s most successful young artists. He believes in his brainchild to the point where he is willing to work without motor for months.

Jones made the exhibition during inhabitation of studios in Providence, Rhode Island and Los Angeles, CA where he is actively pursuing a career in television.

This exhibition demonstrates the qualities that make young artists such a powerful force for culture creation in the American scene and in international communities. It is the same qualities that will lead to artistic recovery. ”We are especially proud of this dedication and resourcefulness. I applaud Jones and all of the artists we are exhibiting at Loyal. We are grateful for their contributions to the artistic community.” says Martin Lilja, who heads up Loyal along with his partner Amy Giunta.

Symbols
Stripped down
Pattern code foundation. Nourish cultural superstructure of society.
Grow beyond visible. Extend into the realm of the invisible.