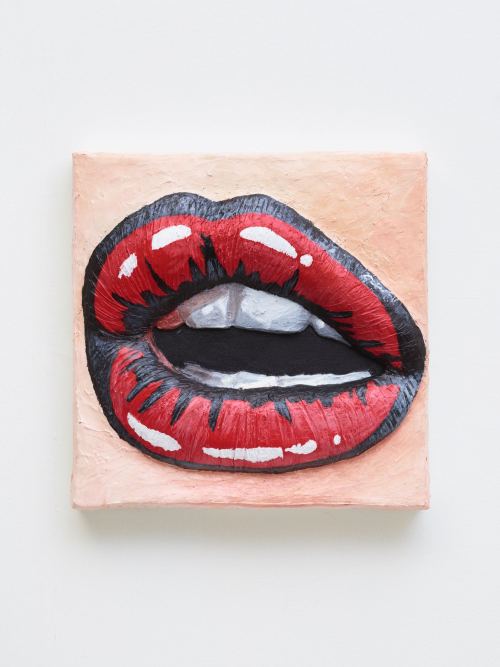 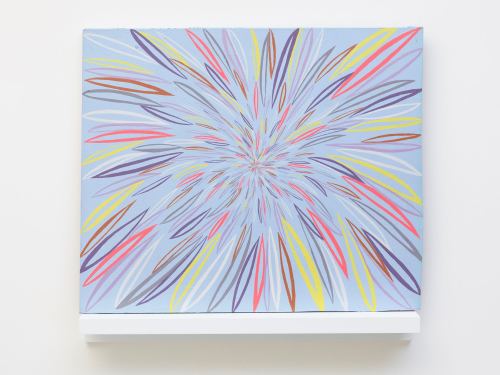 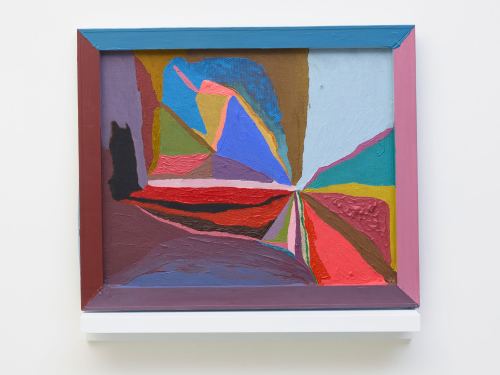 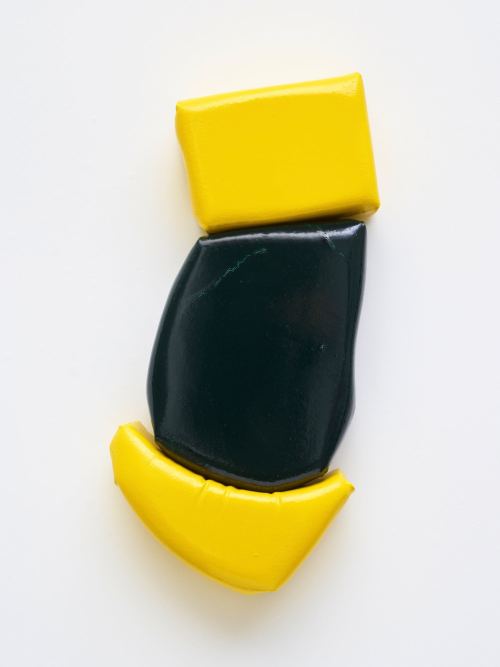 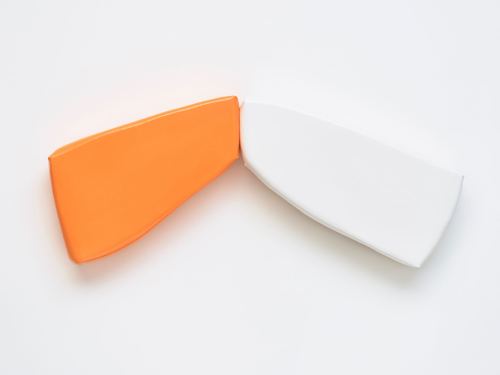 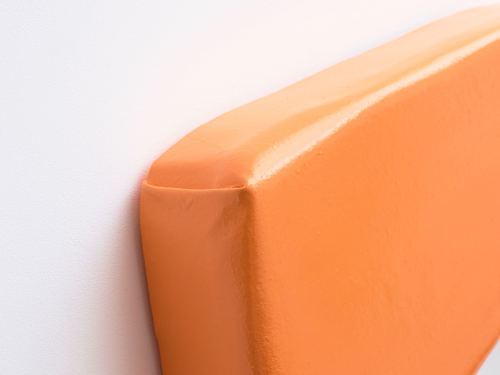 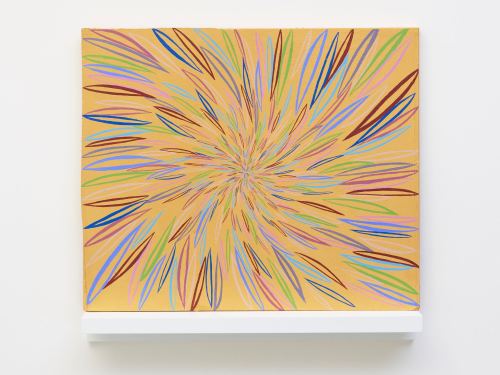 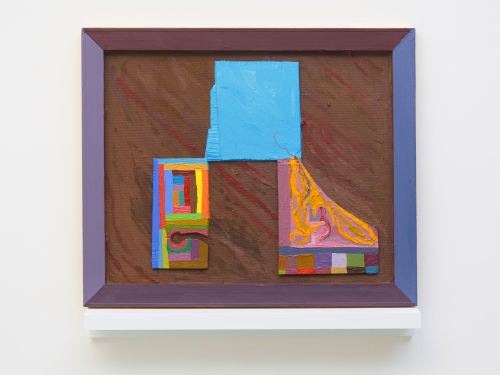 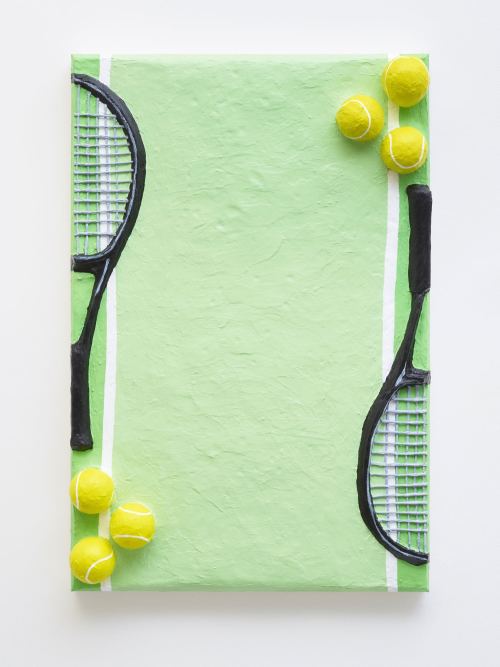 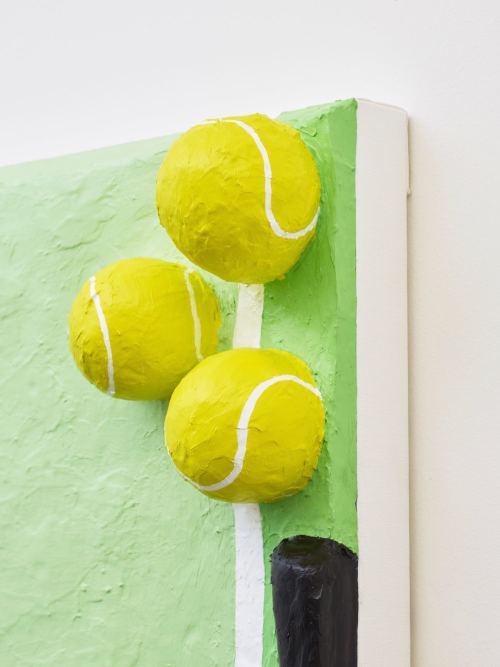 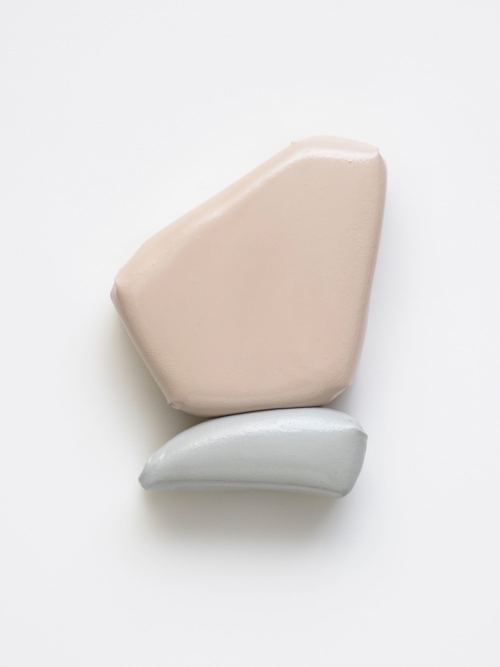 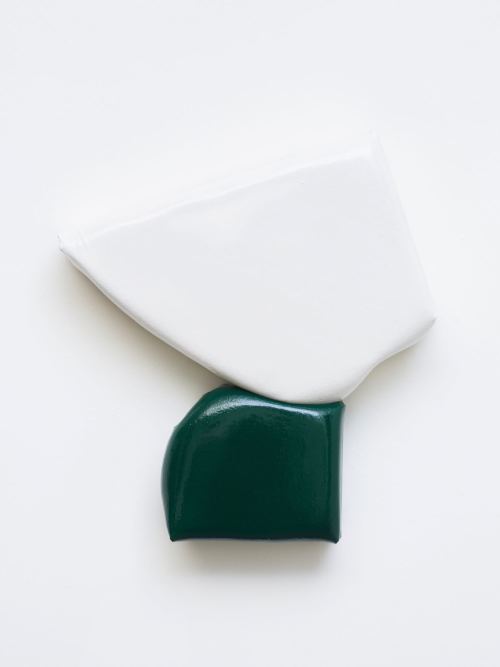 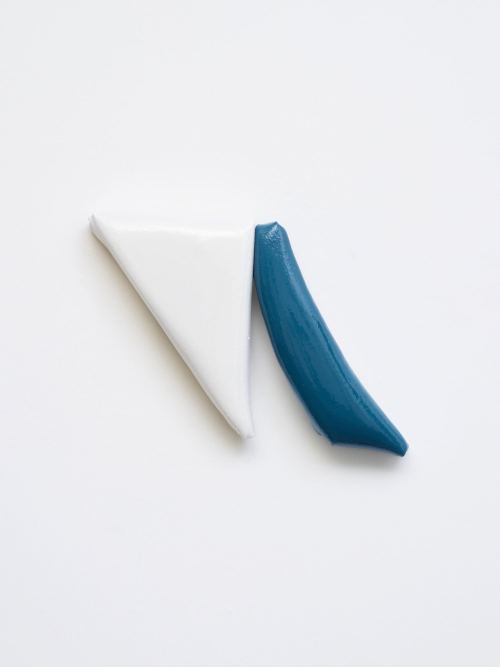 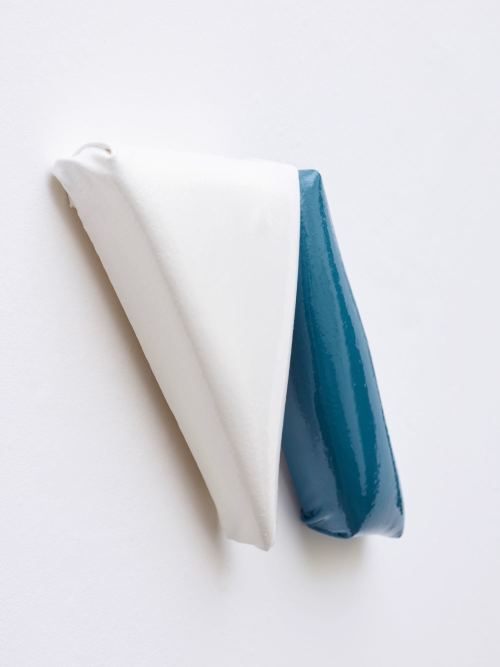 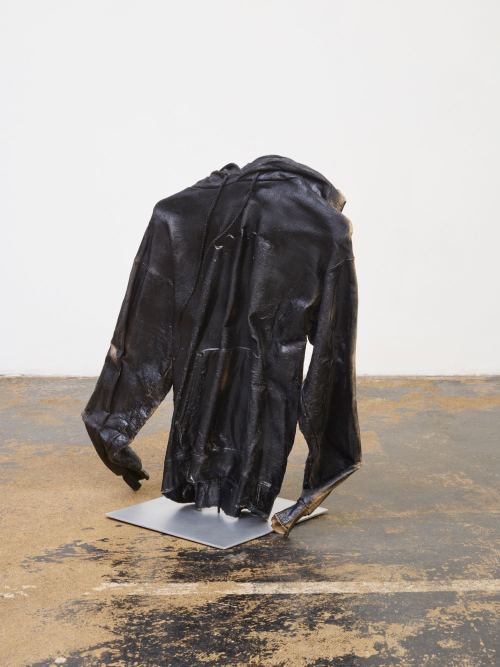 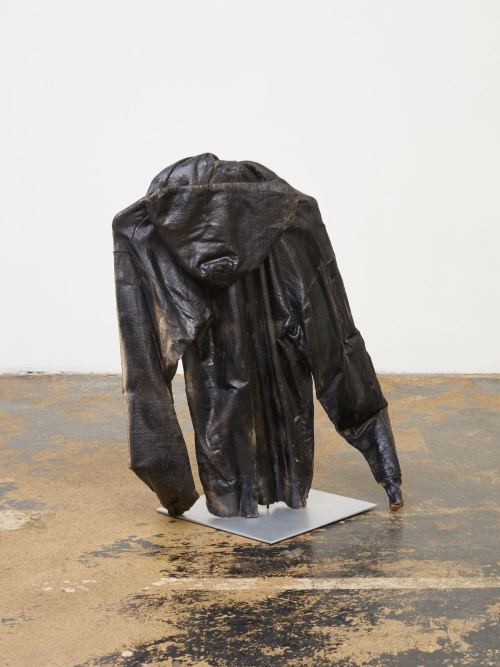 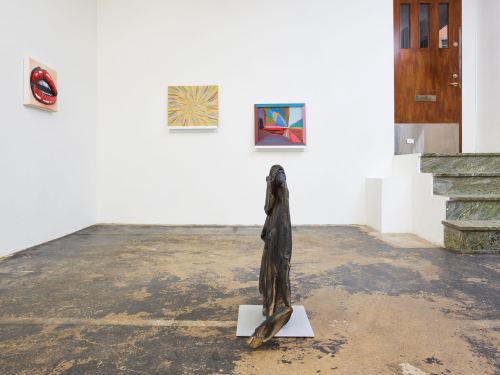 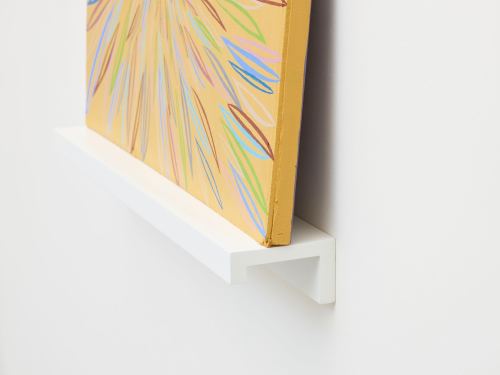 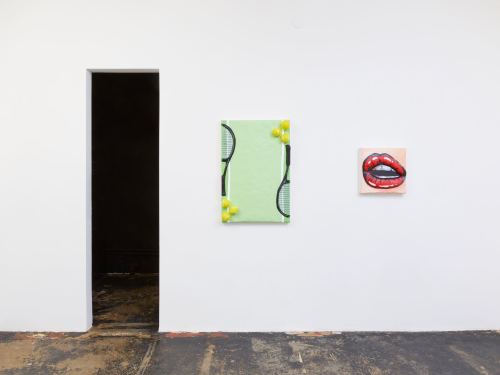 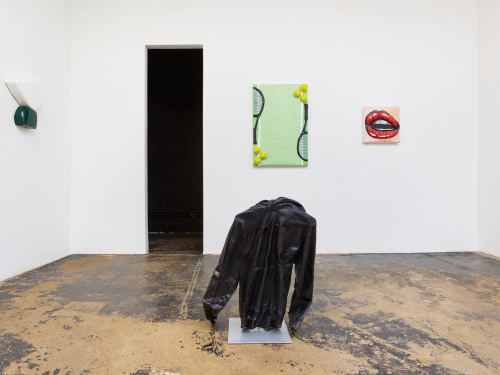 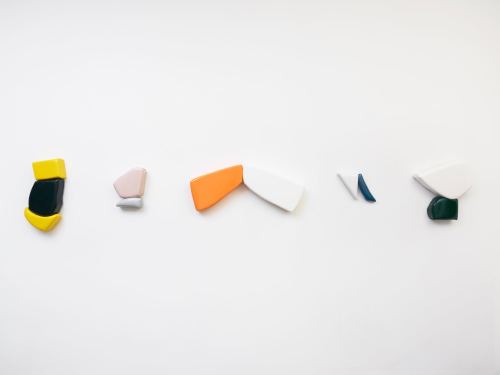 The Concrete States of Animation is a group exhibition of four artists working with painting in three dimensions.

Gina Beavers is scrolling her phone. You are scrolling your phone. If you just posted the perfect photo of what you ate, you just might have made a still life. Gina Beavers culls her imagery from the deluge that floods the feeds: food, beauty tutorials, sport, health, travel, more food. Her idealized images of perfection and desire waver from aspiration to revulsion and back again. Beavers cements these fleeting images into forms, building the paintings up layer upon layer in acrylic high relief. The canvases are deeply contoured as if carved or sculpted like a Roman frieze. In her technique, everything gets equal treatment: a burger, a tennis racket, a makeup tutorial, or combinations in meme-like compositions.

Justin Adian works in a hybrid form of sculpture and painting. The composition begins with a piece of ester foam covered with boldly colored canvas stretched tightly around it, constricting and confining it into a puffy, geometric form. Each work combines two or more interacting shapes allowing associations to play out, if only suggestively. The tension in the surface reveals the force of Adian’s intervention and emphasizes the play that goes on between the shapes. Creases and folds in the canvas look at times like tight clothing on a body. The cosmetics of the animated form are upon it.

Tarik Garrett works with the emotional resonance of objects, memory and experience. One object he uses very directly is the hooded sweatshirt. On February 26, 2012, a 17-year-old kid named Trayvon Martin was shot and killed by a neighborhood watch vigilante who began following him because he was black and wearing this ubiquitous item of clothing with the hood up. His death became a rallying point around which an international protest movement formed, and the hoodie became a symbol of memorial and defiance. Tarik Garrett puts this object through a series of chemical and painterly processes. By thoroughly saturating and soaking the fabric until finally setting it in a state of suspended animation, Garrett’s hoodie stands on its own in the room, like a haunting monument. The sweatshirts come from the Goodwill Donation Center where clothing can be purchased by the pound. Garrett equates these “aftermarket hoodies” with the condition of “excess labor”, stating: “Those of whom are seen as superfluous are most likely to end up discarded by the violent mechanism of the state and private sector, both official and otherwise.”

Chris Johanson is returning in these works to the starburst image that first appeared in his work in 2002, a mandala-like composition of lines radiating out from a single starting point like a big bang that constantly expands outward. The flip-side is also a fully realized composition which makes it ambiguous as to which is the front. The piece stands on a wooden shelf in a casual lean against the wall, like a person might, with both faces visible from the side. “I try to say complicated things in a simple way — death, existential thought processes and anxiety. And I try to decompress that, move that away and bring in more peaceful thoughts. The repetitive quality creates serotonin in my brain. It’s like a peaceful, meditative ritual. It’s something I’ve been doing since I was a little kid.”

While living in San Francisco Johanson was one of the leading members of the artistic community that arose in The Mission district and was central to the exhibition “Beautiful Losers” which toured museums in 2004–2005. Through his work and collaborations, Chris Johanson has had an enduring effect on a new generation of artists. Johanson’s work points to the light and dark in society and urges us to care more about each other and our environment. He speaks of the meditative qualities of art-making with sincere direct communication, transforming it and sending out objects with a poetically charged positive energy that reflect his strong beliefs in environmentalism, compassion, and peaceful co-existence. Making real energy.

Gina Beavers b. 1974, Athens, Greece. Lives and works in New York. She holds a BA in Studio Art and Anthropology from the University of Virginia 1996, an MFA in Painting and Drawing from the School of the Art Institute of Chicago 2000, and an MS in Education from Brooklyn College 2005. Solo exhibitions include Michael Benevento, Los Angeles; Kostyál, London; Gynp, Berlin. Group exhibitions include Greater New York at PS1 MoMA; Kentucky Museum of Contemporary Art; Nassau County Museum of Art; Gavin Brown’s Enterprise; JTT, New York; Valentin, Paris; Night Gallery, Los Angeles; Cheim and Read, New York. Her work has been reviewed in the New York Times, ArtForum, Frieze, The New Yorker, and Modern Painters.