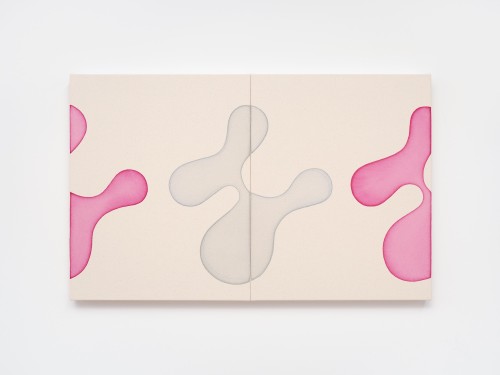 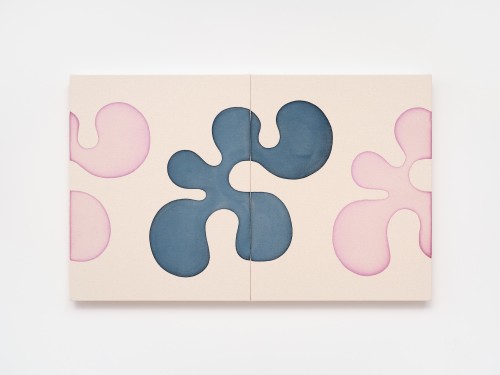 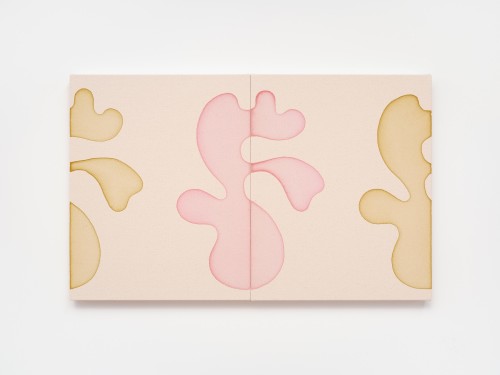 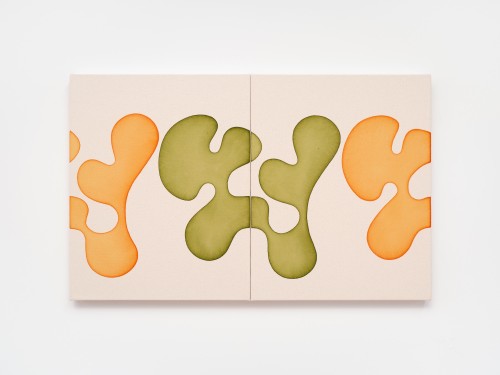 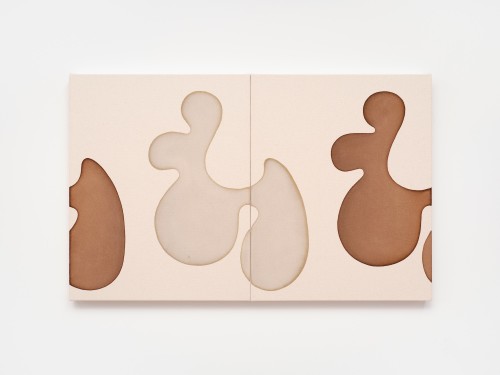 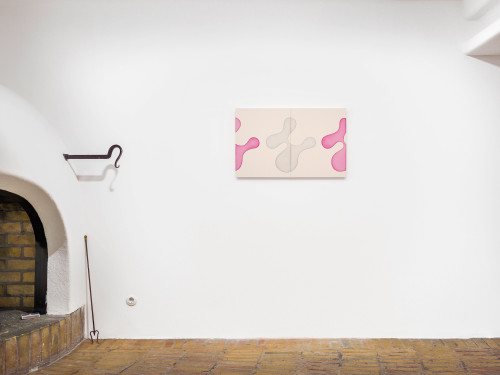 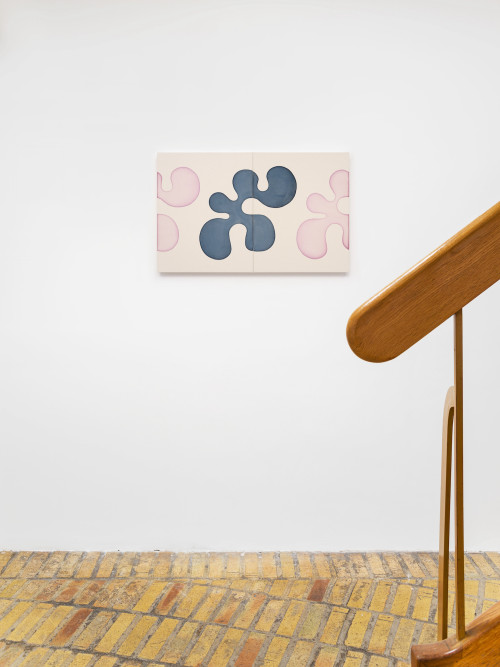 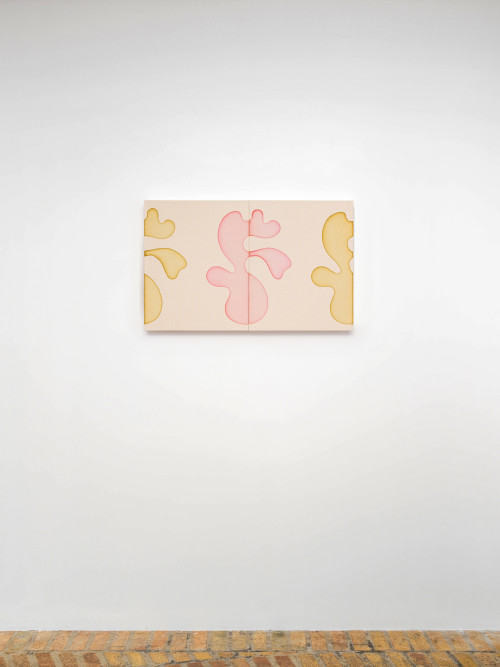 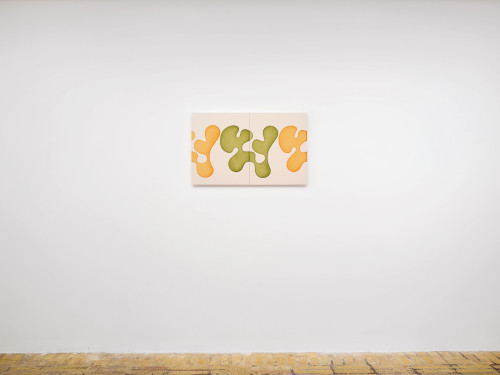 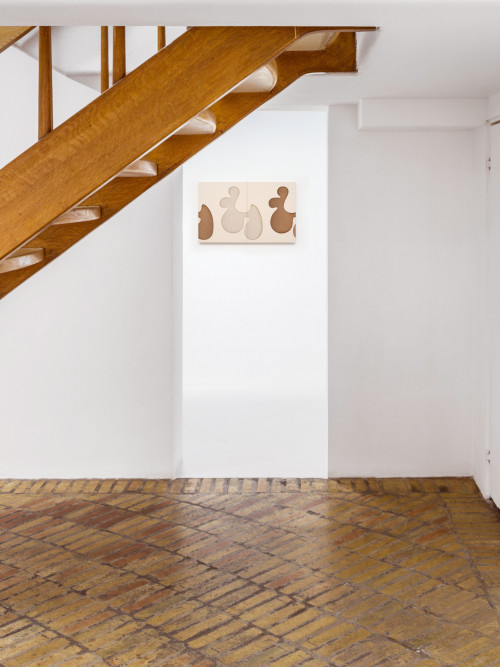 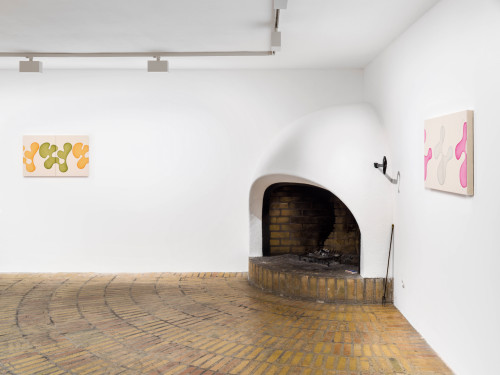 Loyal is pleased to present Landon Metz in Stockholm: It snowed and a half sphere accumulated on a post outside the window. This solo exhibition is Landon Metz’s first with Loyal and in Stockholm.

The show at Loyal is comprised of five two-colored diptychs that hang on the center of each wall of the gallery with its characteristic concentric tiled, brick floor and domed fireplace (both designed by Swedish architect Hans Asplund in the 1950’s). The new group of works expand on Metz’s visual vocabulary of richly hued biomorphic shapes on raw canvas.

Each diptych has one shape repeated in two colors that transverses the two panels, continuing off frame in an ongoing pattern. This sense of rhythmic repetition and the regularity of the forms creates a calm, hypnotic atmosphere in the room, inviting and inspiring an acute sense of perception by the viewer.

Metz’s motifs are organic and softly shaped without any hard angles, never overlapping, constantly bending and arching in what gives a sense of forward movement, not static. If they were sounds they might be prelingual, nonverbal, phantasmal. The diptychs imply the passing of time, one shape repeating in two colors, alternating to create a system. Like the same note in different octaves. The painting evokes not only the image on view, but all that came before or after the image, as if it were an isolated frame of film, or a snippet from an unending stream of code, extending on in either direction infinitely.

In his practice Metz continually investigates the endless potential of these iterations of shape, color and line that span his work. Responding to the inherent properties of the materials themselves, from the threads of the canvas, to the drying time of the dyes, all moments in creation of a work have significance. Each carefully concocted dye is applied onto the canvas with a broad brush, slowly pushing the liquid to find its form. Sustained blue, lilac, green and pink forms and expanses of open spaces of canvas willfully retreat into silence. The result is a subtle visual and physical experience in this interplay of colors and shapes that create a dynamic impression of movement across the surface.

The tension between the positive and negative space and a simplicity predominate the show. The emptiness in the canvas is loud in what is not made visible. For each physical form that is made visible, there are many more that are not. It is not negative space unfilled but it is what the space is not filled with that surrounds it and creates the atmosphere in the physical form of the canvas.

Metz grew up in the American Southwest, a landscape that reverberates with subtle forms and curves of monumental rock formations and canyons that reveal the slow and deliberate effects of time and the elements. The warm tones of the rocks and the constantly shifting colors and movements of the light on this landscape naturally had a formative effect on Metz, “The desert definitely taught me to find delicate detail in what appears to be a harsh, barren landscape,” (Metz) and continue to be an innate source of inspiration throughout his work.

BIOGRAPHY
Landon Metz was born in 1985 in Phoenix, Arizona and lives and works in New York. His work has mounted solo exhibitions at Francesca Minini (Milan), Sean Kelly (New York), Andersen’s (Copenhagen), Patrick De Brock Gallery (Knokke), VI, VII (Oslo), among others. In 2018, Metz was the subject of a solo exhibition at Museo Pietro Canonica in Rome. Metz was featured in the group exhibitions Blue at The Nassau County Museum of Art In New York, and Greffes, curated by Pier Paolo Pancotto at Villa Medici in Rome. In 2014, he was the artist in residence at the ADN Collection in Bolzano, Italy. This is his first solo show with Loyal.