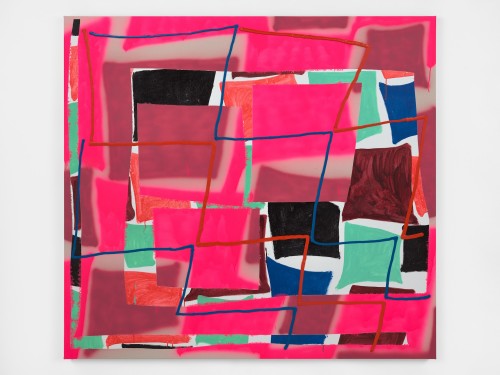 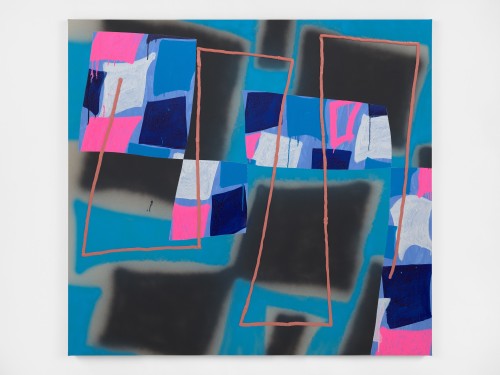 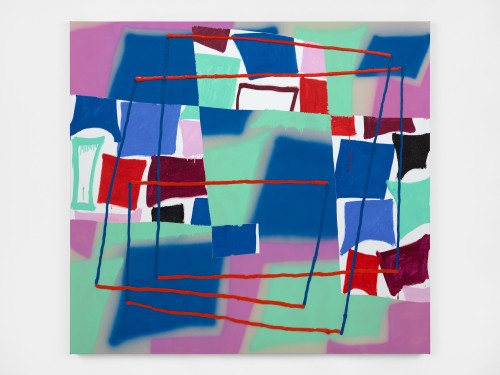 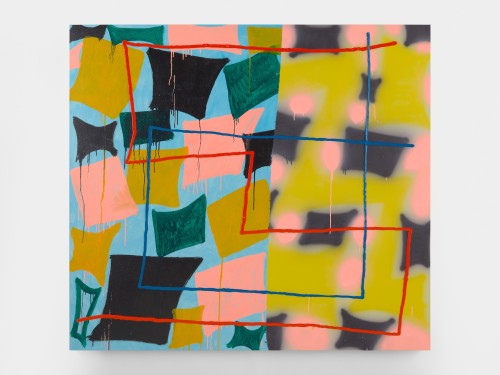 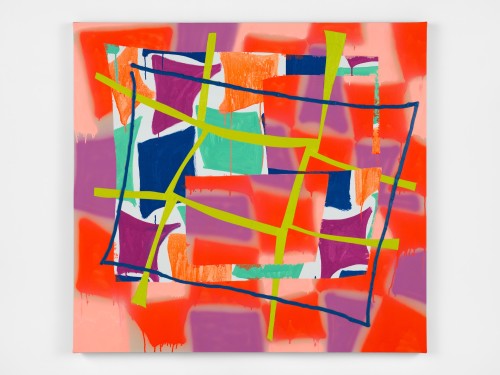 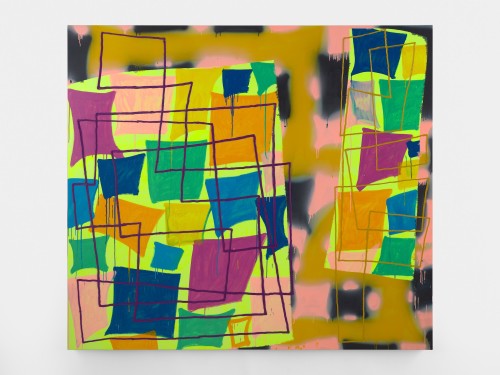 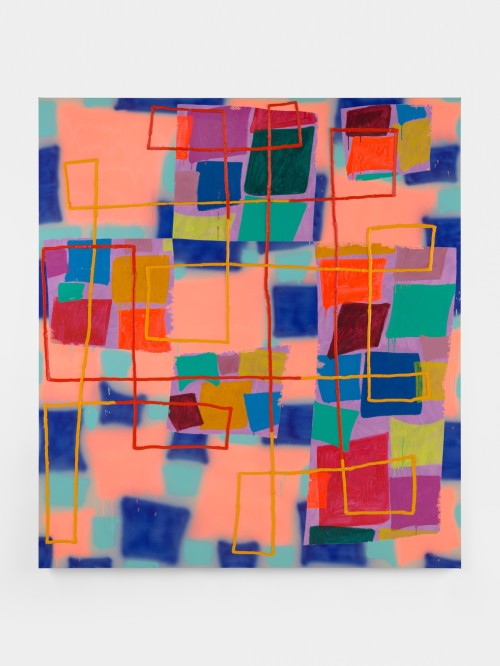 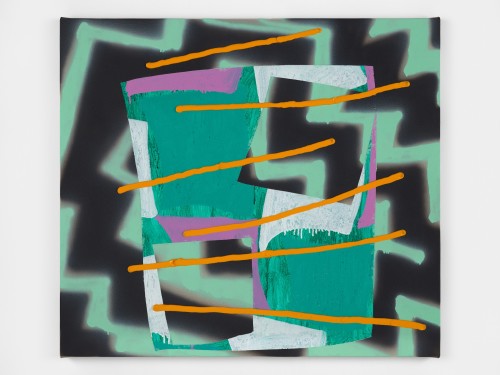 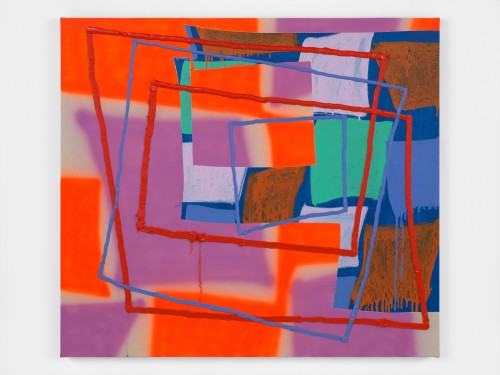 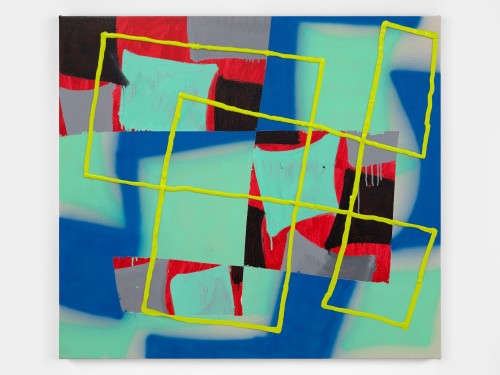 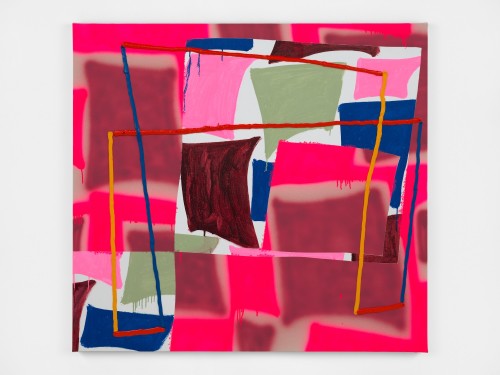 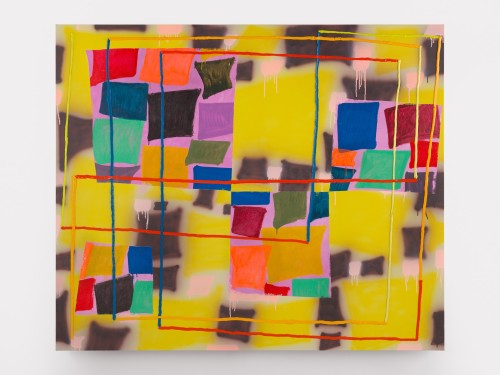 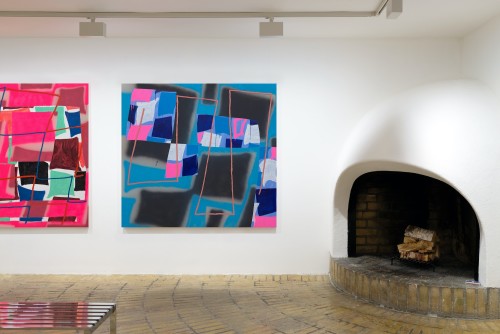 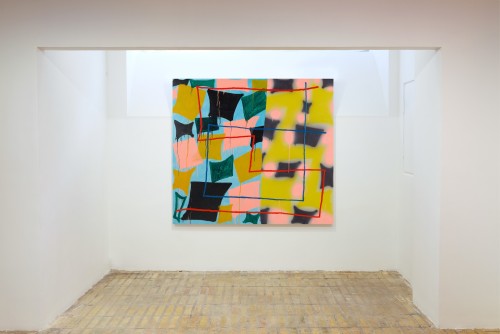 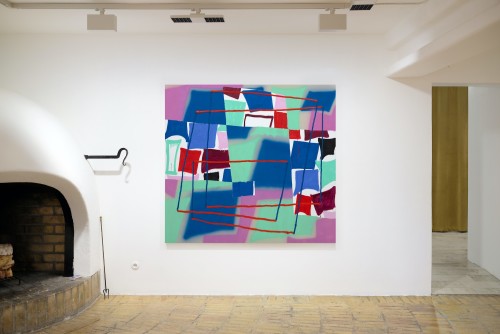 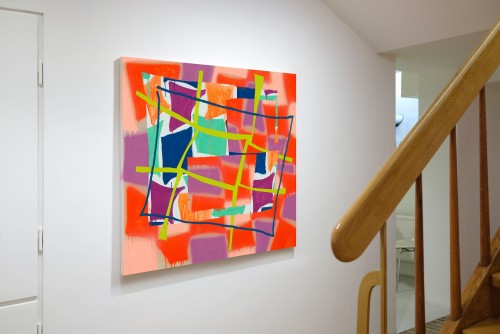 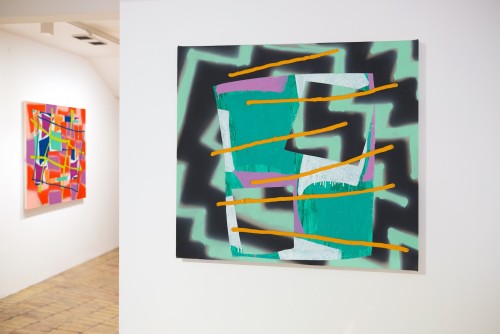 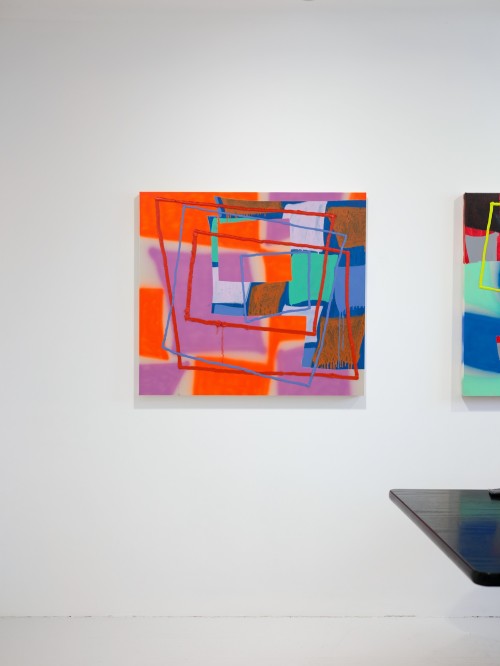 Layers upon layers, but also within, alongside, beyond. Layers as surface and sediment, as movable things unmoved, as the aggregated sum of their parts but their individual parts, also.

Trudy Benson’s painterly layers continuously redefine themselves, redefine their own bounds: Even as they prod at the aesthetics of organisational logics—networks, sequences, grid—they remain in good-humoured flux. But as Benson arranges her sloppy tables and squares, taping lines and masking sections of canvas to create depth, disarray, dizzy dynamism, it is not only the sparring layers that come into focus. Instead, we glimpse the very act of painterly layering: that which establishes a perspectival hierarchy so as to determine the manner in which we interact with (and interpret) images.

Benson toys with this hierarchy—and does so with a joyous glint in the corner of her eye. As the many components of her paintings intermingle, interact, overlay, overstay their welcome, structure becomes aesthetic, schematic becomes style, infrastructure, image. Two Steps Forward, Two Steps Back (2019), for instance, refuses to settle, its prismatic squares enacting their titular dance within (or around or upon or amidst) a structural three-by-three grid. With their edges losing and regaining sharpness, Benson’s shapes boldly announce themselves to the surface only to retreat to the armature once more, submerging themselves within a background of peach melba and blue. (If, indeed, the designations ‘back’ and ‘front’ still apply.)

Benson’s paintings are often discussed in relation to the ‘digital turn’: the recent moment at which contemporary painters began interacting with digital vocabularies and emerging methods of technological production. In certain ways, the alignment holds: Benson has described her early works as ‘still lives of digital programs’, and her aesthetic surely mimics that of elementary image manipulation programs. In a certain light, the loose interconnectedness of her compositions could also allude to the transitory logic of digital space (the show is titled ‘Join’, after all), while her lither gestural marks are reminiscent of those left by fingers on screens: ghostly smudges that sit somewhere between intent, expression and abstraction of the self.

But while Benson acknowledges this digital legacy, so too does she stage a small act of resistance against the cold, two-dimensionality of the screen. Repeatedly, her work applies pressure to its own surface, pushing up and out of its skin via forceful acrylic schmears, angular lacerations and interconnected slugs of paint piped directly from the tube. Benson has spoken of a ‘nostalgia for digital processes’, but now we locate a second and somewhat incongruous longing: for a haptic thingness that is at odds with the ephemerality of our contemporary age. Here, a reinvestment in the physical memory of expression, a belief that gestures should stick.

How, then, to interact with Benson’s marks? Are these gestures, in the truest sense, or painterly cyphers for those very gestures (or, indeed, both)? In his essay ‘Reassembling Painting’ (2015), David Joselit discusses the subject-object brushstroke: a dual act that is at once an expressive gesture and a component of a system. Benson’s work could find a home within this theorised binary framework: both subjective and objective, referential and reactive all at once, floating between the many layers that comprise our visual world. Between, but also within, alongside, beyond.