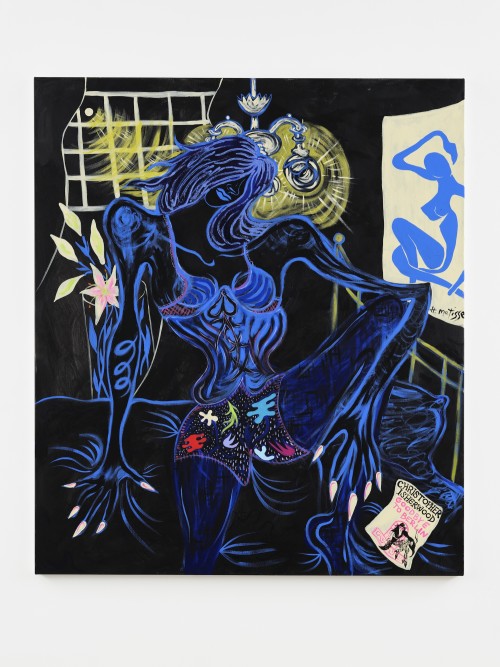 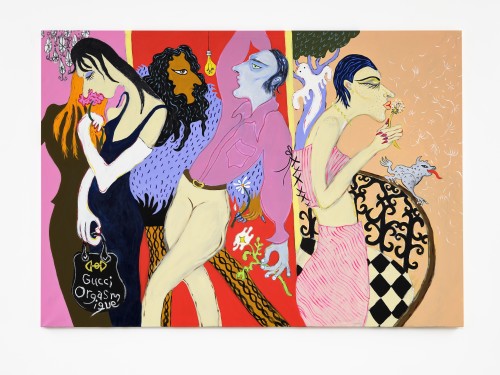 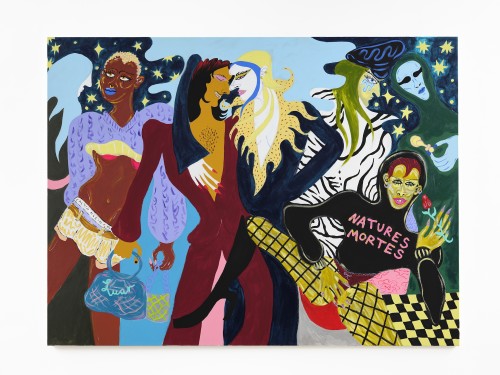 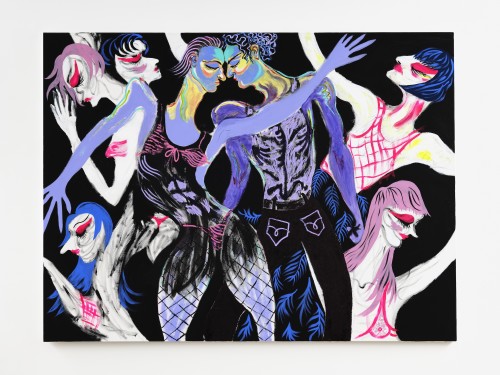 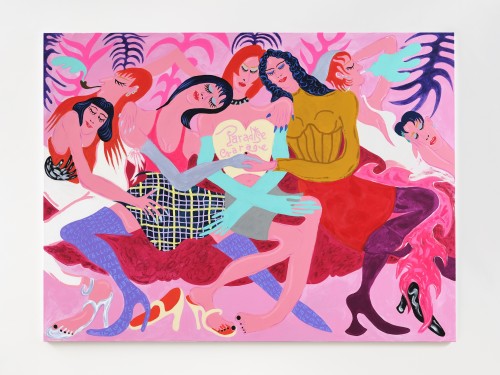 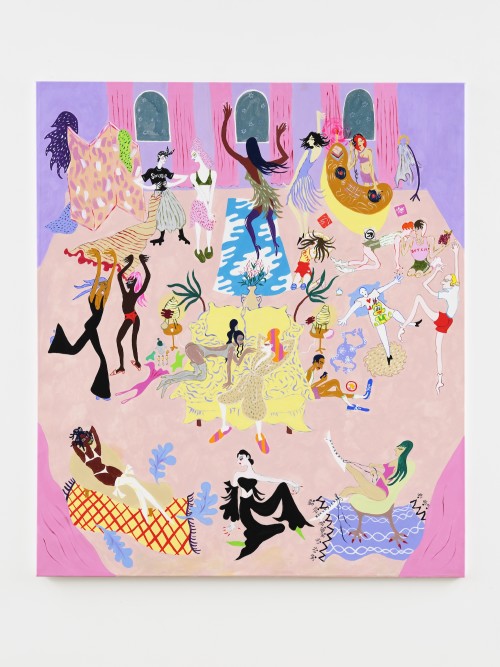 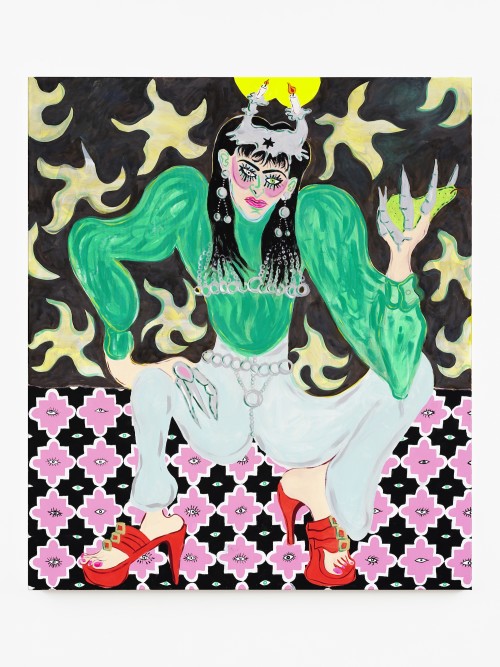 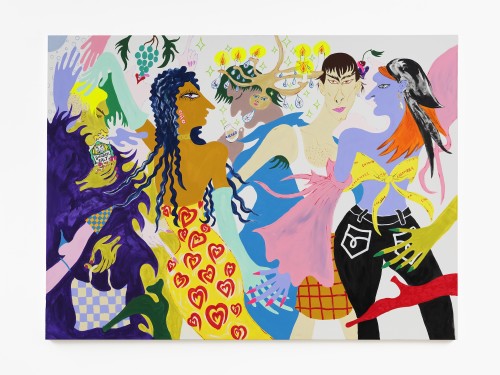 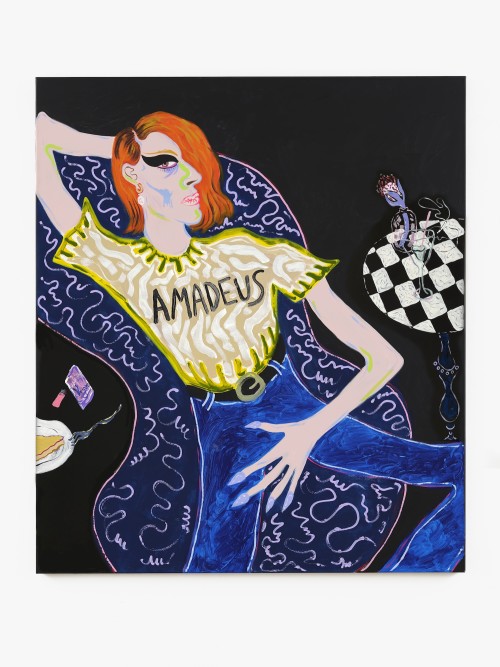 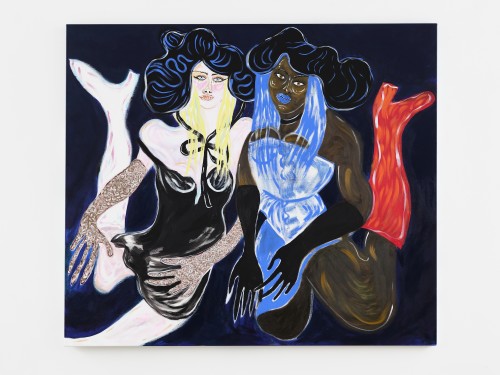 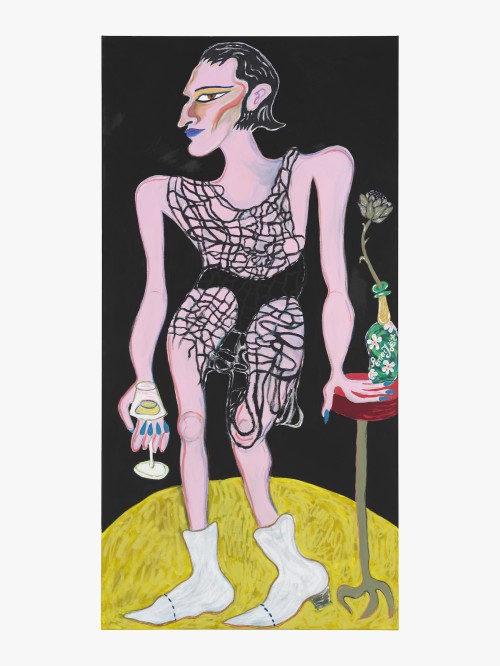 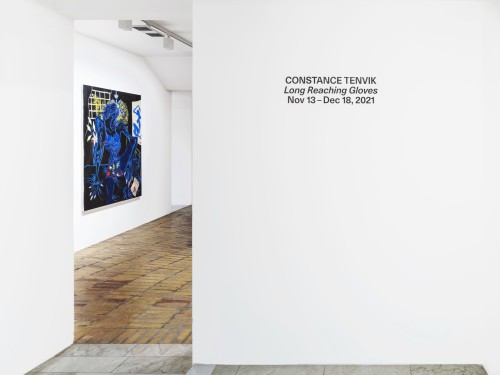 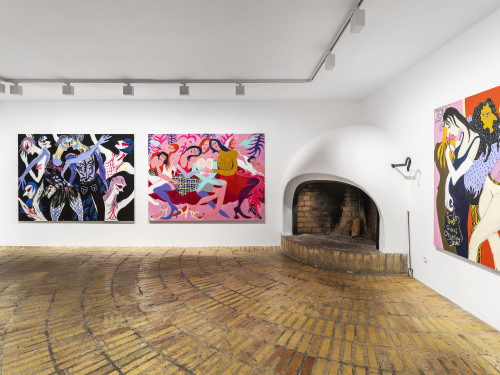 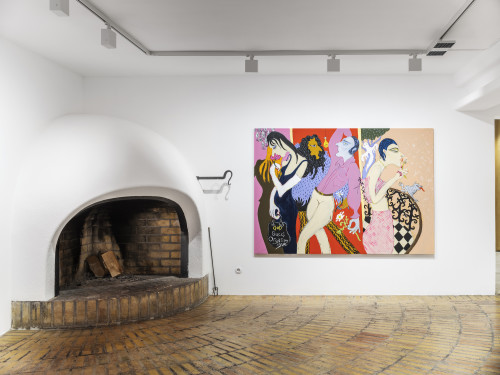 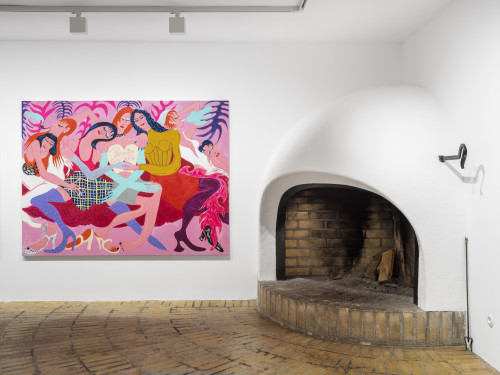 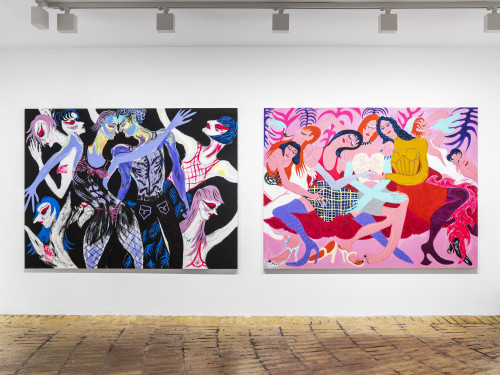 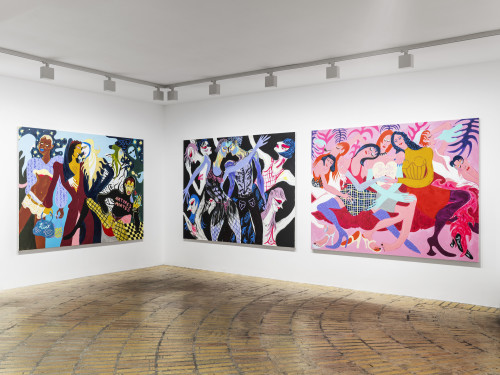 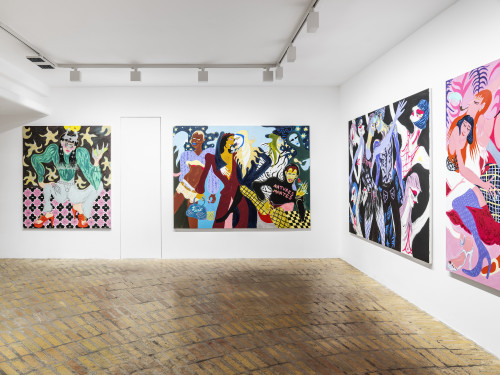 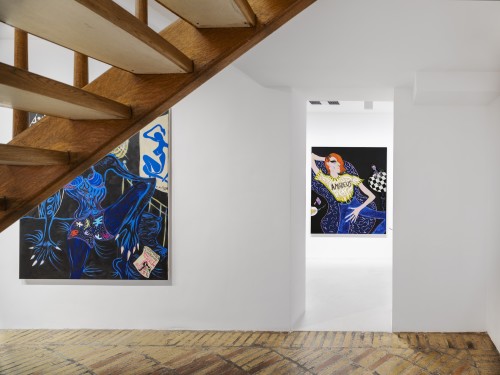 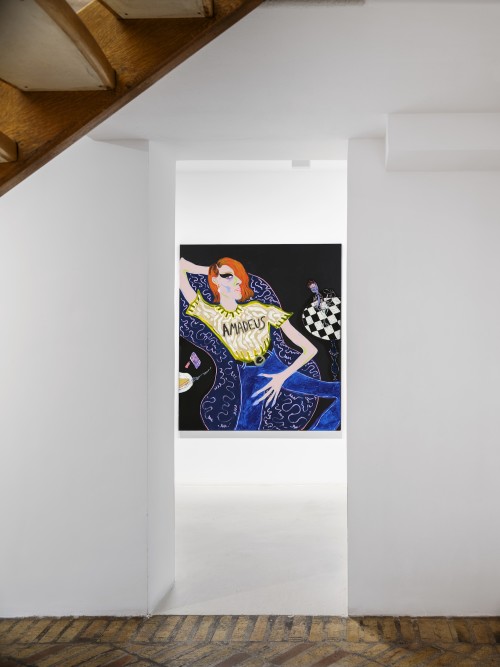 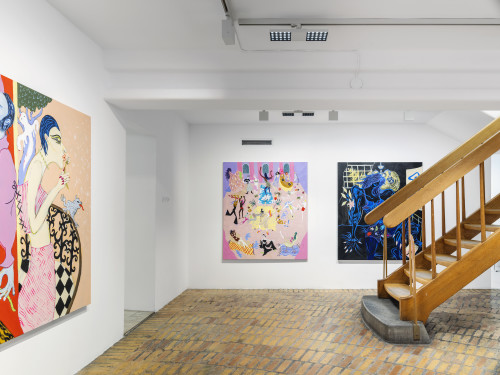 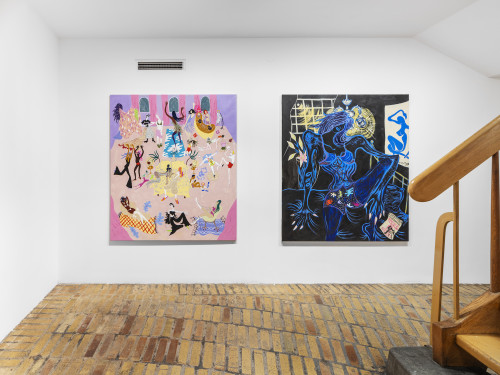 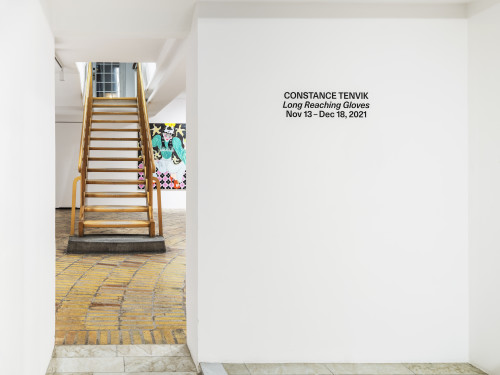 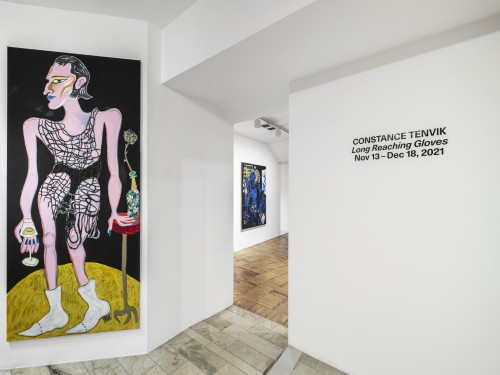 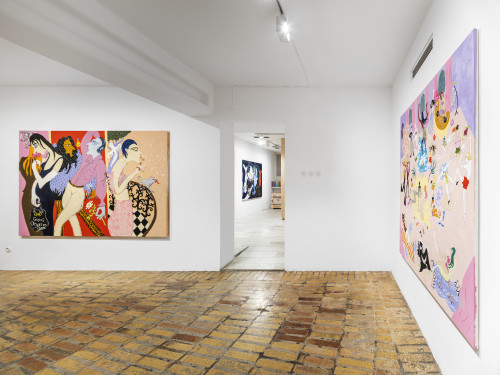 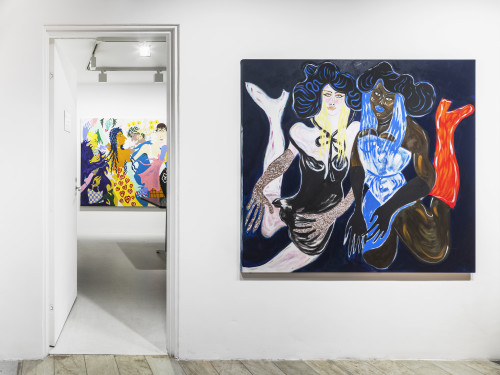 Loyal is excited to announce Constance Tenvik’s second solo exhibition with the gallery, Long Reaching Gloves. The exhibition presents 12 new large scale paintings made in the artist’s studios in Berlin, Marseille and Oslo. The exhibition follows up her 2016 solo Gesamtkunst with Myself and her curated exhibition from 2019 A Seed’s A Star at Loyal. A catalogue will be published for the exhibition keep an eye out for that..

Constance Tenvik’s recent paintings are social objects, portraying subjects from friends to role models as they flit and flirt through surreal and vibrant settings. She does not create in a vacuum, and these paintings catch a portrait of the artist through the people, places, and things that she loves. Tenvik is not afraid of being on the nose. Works are often titled with the names of friends that they portray; in her painting of fashion icons Jacqueline Landvik and Ceval voguing in twinned outfits, Tenvik presents an image of friendship and of identity in flux. Tenvik’s interest in fashion as a mode of performance, play, or self-proclamation is broadcast by details such as a “Gucci Orgasmique” handbag, a purple-dyed coat, or flapper dresses. All the while, the history of modern art is heralded by a Matisse blue nude or aesthetic references to Moki Cherry, Florine Stettheimer, and Alice Neel.

Tenvik’s method of figurative painting similarly emphasizes exchange above representation. Portraiture is not something that she creates alone, but something that happens between the artist and her subject. She evokes the energy of an interaction, the magic that vibrates between herself and another, between that other and their milieu. Bodies blur and blend, becoming one with each other and with the environment that surrounds them. In a canvas as pink as a valentine, hands mold seamlessly into the points of shoulders. The sleepy pressure of knee to calf creates a single rosy shape. An elbow extends into the air, seeming to belong to no one in particular. The landscape encroaches. In the same fleshy room, outlines of gloved talons and flame-like tongues of feathery boa pattern the foreground with sinuous curves and points that mimic the tropical foliage of the wallpaper behind. Redheaded dreamers waft bushy clouds of blue-green smoke that flatten with the figures into the indolence of background. Fluidly adapting, these figures are less interested in identity than the permeability of boundaries.

Capturing lived experiences from the cities that Tenvik has called home, her diaristic canvases tell stories about places in time. As Ernst Bloch wrote, “We also take on the form of our surroundings. Not only does the man make his world but the world makes the man.” To highlight this point, the text-rich signage and ornate window-arrangement in Tenvik’s painting of a Marseille patissier seem to eddy out into the figures that populate this scene; in a doorway nearby, a couple embraces sweetly, the right figure sporting a kerchief like the latticed top of a tart and a purple dress bedecked with croissants. Several works recall Tenvik’s indefatigable evening hours in Berlin. In one almost abstract piece, pink figures boogie against a black background, suggesting the experience of being one in a sea of people. On another starkly lit dance floor, a purple arm flung wide becomes the hunched shoulder of another figure entirely, lost in the urgency of movement. Textual references are as often illustrative as they are quotational, suggesting a mood, a place, or a link to Tenvik’s own biography. A blue figure in laced bustier and hot shorts sleeps with Christopher Isherwood’s Goodbye to Berlin, pointing to Tenvik’s own departure from the titular city. Her next destination is suggested by a self-portrait in which the artist wears a shirt inscribed “AMADEUS,” her face rendered in simultaneous profile and three-quarters perspective like a Picasso demoiselle.

These scenes of hustle and bustle in streets and public places are balanced by intimate visions into rambunctious worlds. Tenvik imagines her ideal bedroom as a Stettheimer-cum-Where’s Waldo? scenography, aswirl with the romping and masquerading outlines of friends and fictions. If Tenvik’s own avatar remains ambiguous, we can find her in the traces of past works which bedeck these resplendent accommodations, including a soft sculpture from her Voyage Autour de Ma Chambre and textile-decked hall stand from SOFT ARMOR. Appearing more disco than dwelling, the scene calls to mind Moki Cherry’s modus operandi: “the stage is home and home is a stage.”

Performance has been an important part of Tenvik’s practice for years. While this show does not stage a historical re-enactment or an opera (as she did in her last show at LOYAL, Gesamtkunst With Myself), the accoutrements of theater can be seen everywhere from fantastic costume to masks and shadow play. However, a painted reference to Charlie Porter’s 2021 book What Artists Wear, suggests a more earnest question underlying this fascination with transparency and disguise: how to perform what we wish to be or what we are? In Tenvik’s everyday life, dressing up is the new dressed down. In her paintings, the constant costume changes tell us that we can be everything, all at the same time.