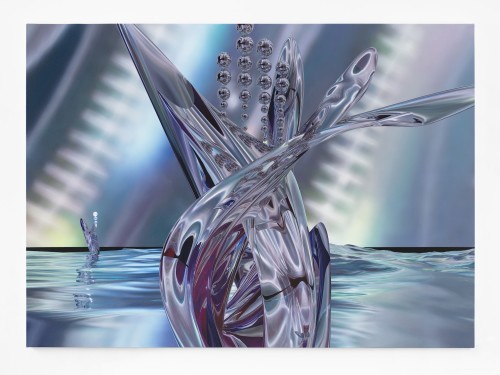 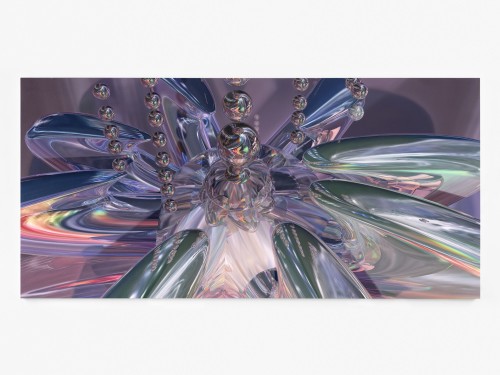 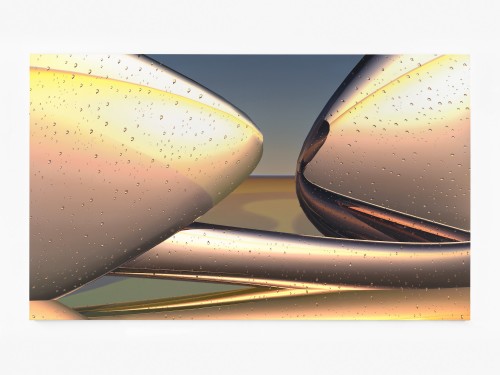 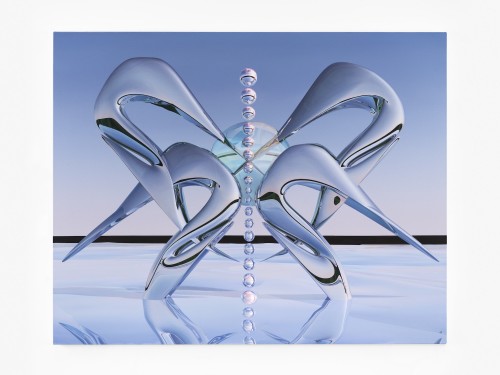 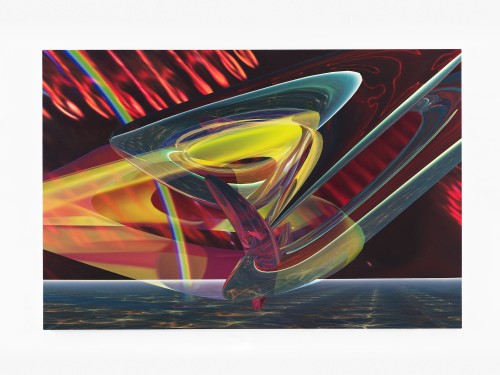 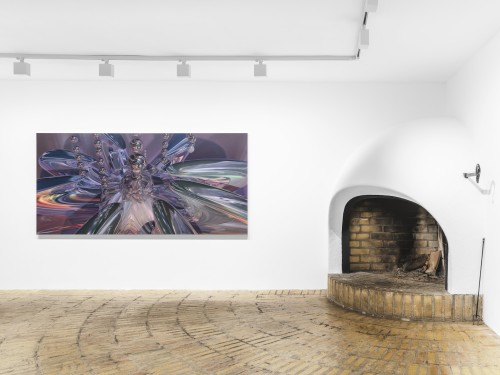 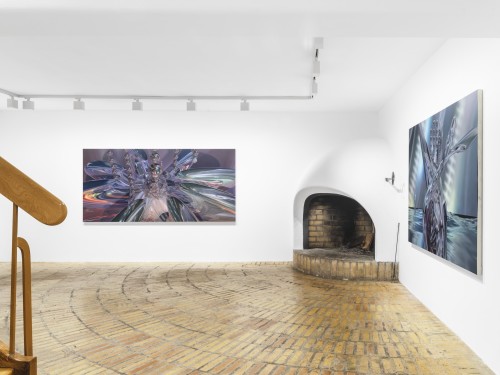 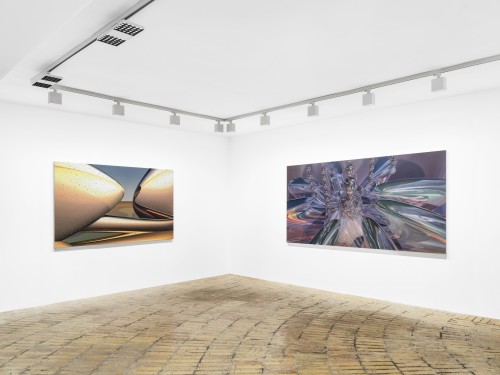 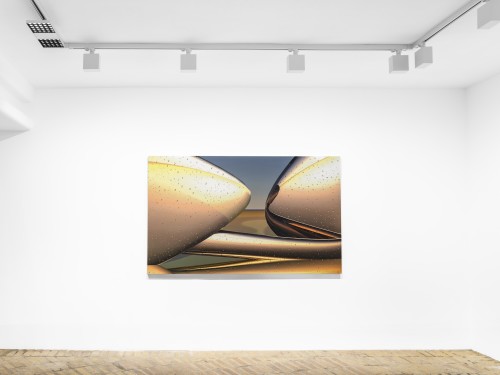 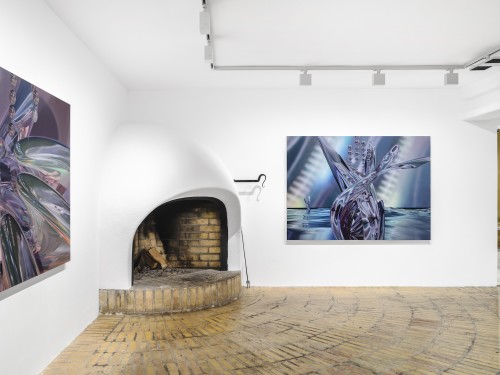 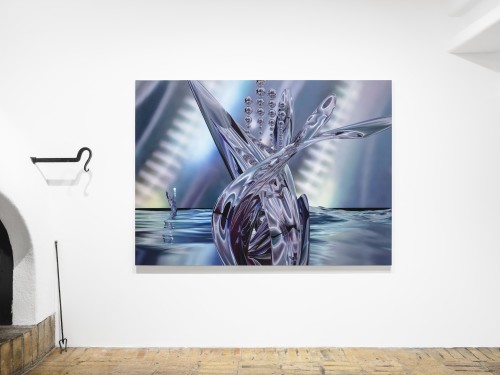 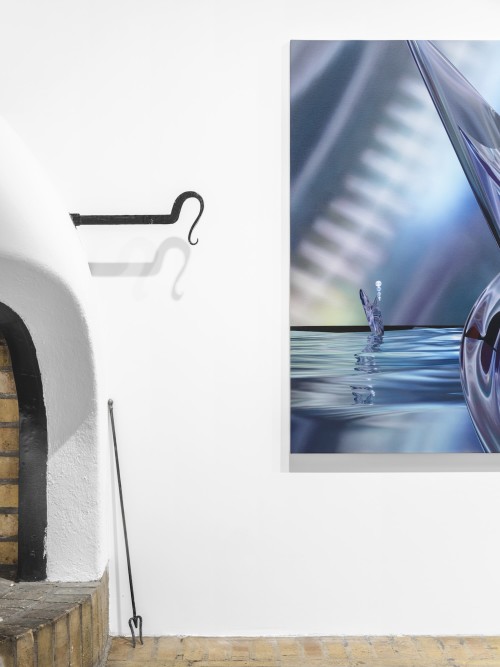 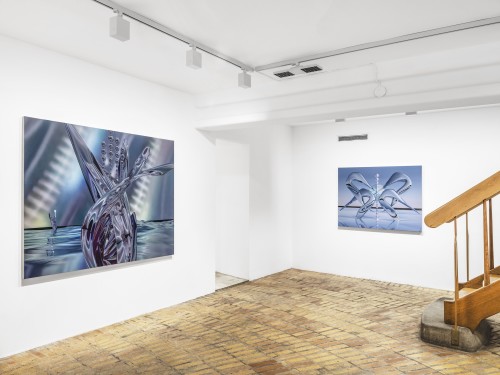 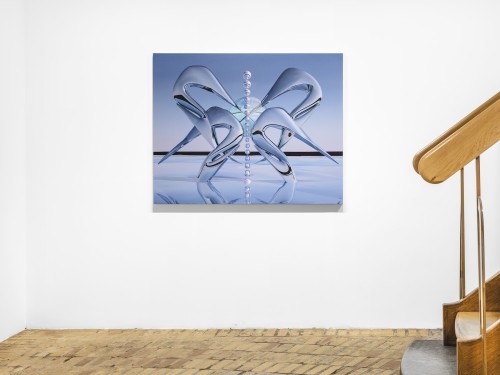 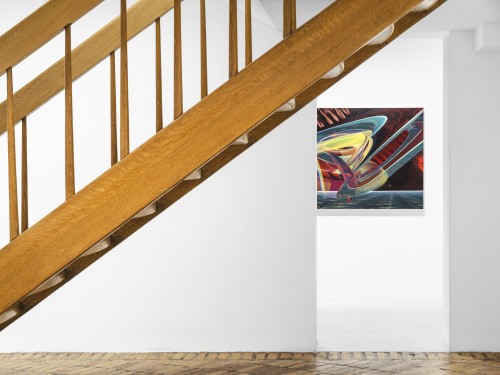 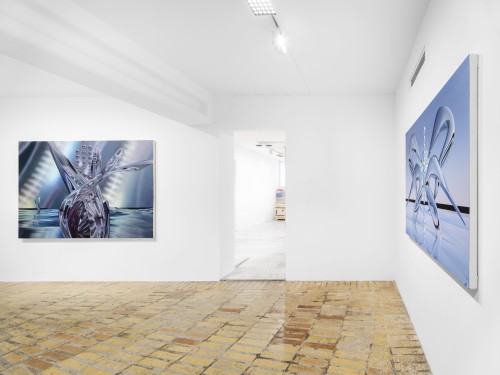 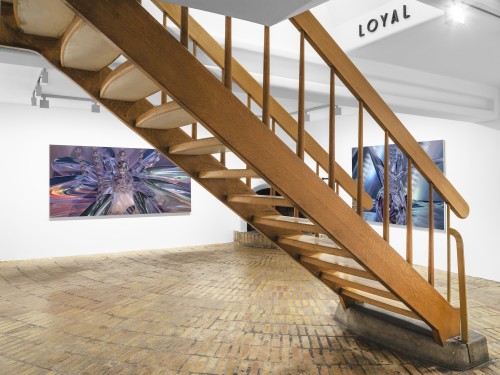 Glacial metal swan-dives into itself, infinitely. It is so cold here it is Edenic—meaning, nothing threatens to melt. What is cold remains pristine. Shadows are green and shiny, like the gleam of a serpent’s lurching tail beneath a hard veneer of ice. Reflections do not mirror reality. A cloudless blue sky generates impossible reflections of rosy cumulus clouds.

The sea does not have to part for miracles to occur here. Metal rises out of still water. A subdued and placid spectator, the sea seems to say “miracles are quotidian”. If metal could fly, it would be sharp and soft, at once. Zippers cut through the air.

Khoury, خوري, meaning priest in Levantine Arabic, is drawn to the act of worship. Raised by Iraqi and Lebanese-Palestinian parents, she searches for holy spaces and homelands lost to the afterlives of war, expansion, and militarism. In a reparation of sitelessness and estrangement, Pure Boy depicts spaces and figures immaculate, whole, and mostly pure. The intersections of sitelessness and utopia begin even at the linguistic, of Greek origin meaning ‘ou’ (‘not’) and ‘topos’ (‘place’) translating as ‘no-place’.

It is dawn in the desert. Everything is so yellow it is white. Looking anywhere is akin to looking directly at the sun. It should be dry, but geometric rain drops sit on chrome, resistant to gravity. A suggestion of water rests quietly at the horizon, ambiguous whether mirage or oasis.

From sitelessness and ‘no-place’ emerges the virtual site: a (no-)place of decorporealized communion. Khoury’s process begins with digitally rendering imagined worlds and the architectural and biomorphic object-beings that inhabit them. She likens rendering to playing God. Relearning images by hand, she exactingly recreates them with oil paint, realizing the virtual site as tactile, corporealizing the decorporeal as embodied. While the utopic is often looked at as fictional or non-existent, inherent in its ‘no-placeness’, Khoury’s paintings find place through the process of rendering and re-rendering—a process that is reverent in and of itself.

Tyrian purple petals outstretch like phalanges, grasping. At the heart of a lotus lies a sphere, where shards of transparency sacrifice themselves to opacity. One sphere begets the next, each one saturated with matrixial reflections and the scrape of a pixelated rainbow. Each sphere a megacity, a microorganism, a celestial vault.

Utopia is frequently used as a pejorative to indicate the hope of its humanist achievement in the far-off future, but Khoury’s sites of (no-)place exist now, asynchronously, and not-so-humanly. They are here, but elsewhere. They have been given place through humanized labor, yet bear no mark of the human. The object-beings in these worlds are fleshy and chromatic at once. If sitelessness and utopia are conditions of being temporally and physically estranged, Khoury proposes remediation through a glimmering physicality. Drawing from symbols as primordial as comb jellies ctenophorae or as evanescent as a rainbow rendered by chance on 3D-modeling software, Khoury depicts the virtual site as real and ancient, if not monumental.

Lava courses through the sky as blood would through the living. A red sky feels strangely anatomical, as if here, we are inside something that is very alive. Vehicles of light begin to look like organs dappled with reflection. A rainbow strikes through, hurtling towards the horizon. What hymns do organs sing elsewhere?

CHANEL KHOURY (born 1998, Rhode Island) lives and works in Los Angeles, CA. She earned her BFA from New York University in 2020, along with a degree in philosophy. Khoury’s paintings and sculptures explore notions of physiological adaptation and spirituality. Her debut solo exhibition, Supera, was presented in winter 2022 at Over the Influence (Los Angeles). Khoury’s work was included in the group exhibition “Vaster than Empires” (Chanel Khoury, Candice Lin, Becca Mann, Catalina Ouyang, Estefania Puerta, Lauren Quin, Lauren Satlowski, Ilana Savdie, Pauline Shaw, Stephanie Temma Hier) at Friends Indeed (San Francisco) in summer 2022 and “Home Alone 2: Lost in Miami” curated by Will Leung, Surface Magazine (Miami) in winter 2021. Writing on her work has been featured in The Hollywood Reporter’s “What to See in L.A. at Frieze Plus Must-Catch Gallery and Museum Shows”, Artsy Editorial’s “Inside My Collection: Sophia Cohen”, as well as Forbes Magazine, Architectural Digest, Musee Magazine, among others. Khoury’s work is included in the permanent collection of the Institute of Contemporary Art Miami (Miami), Pond Society (Shanghai), and X Museum (Beijing).

This is Chanel Khoury’s first solo exhibition with Loyal and her first in Europe.