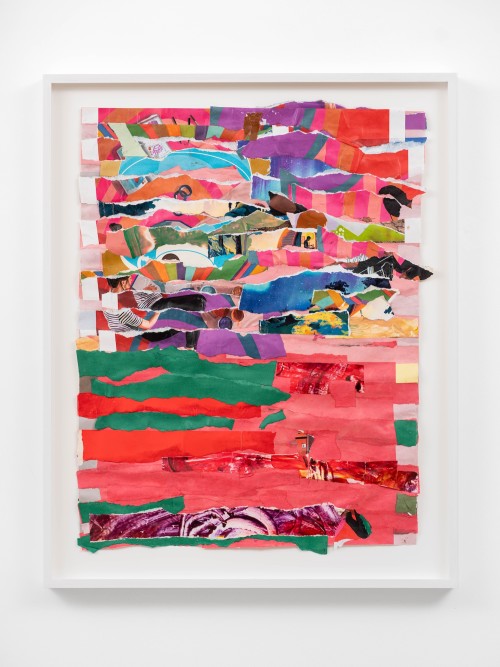 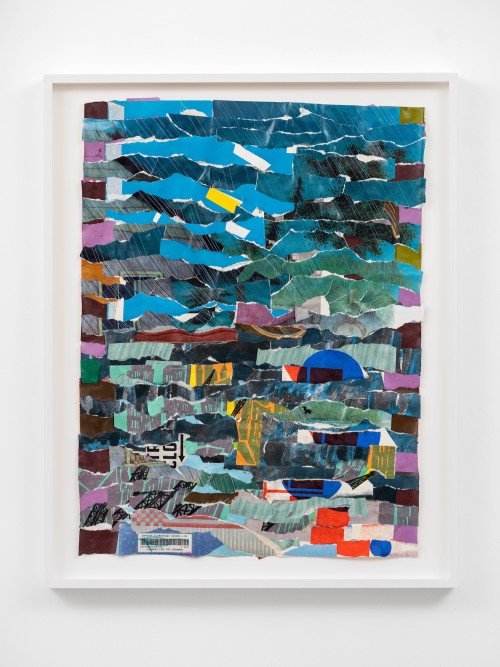 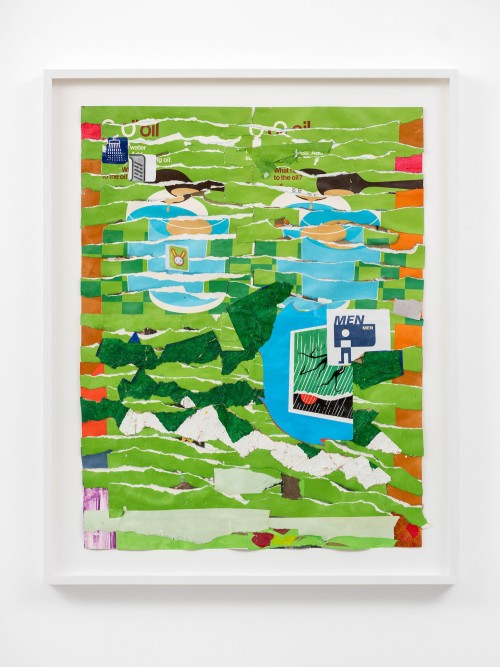 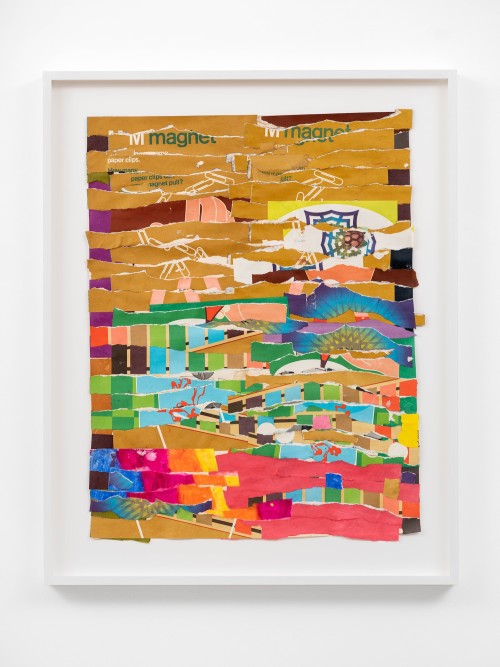 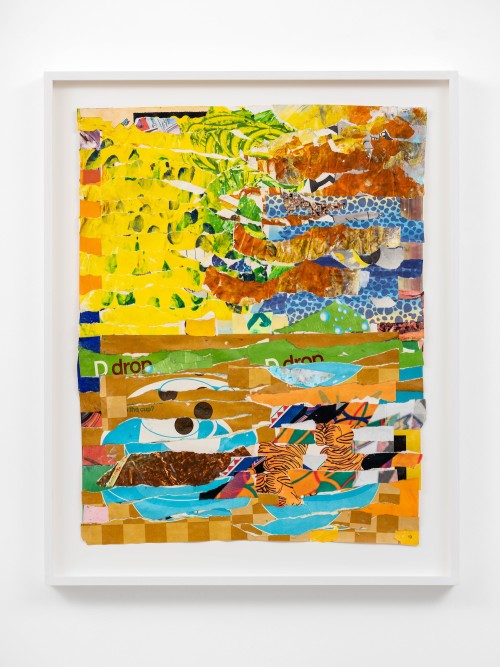 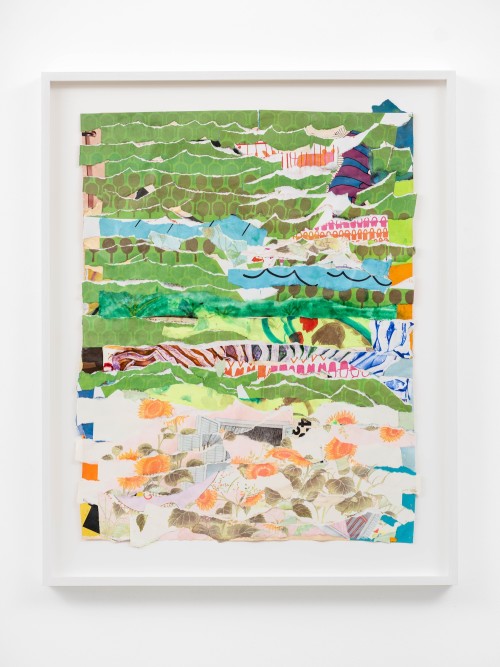 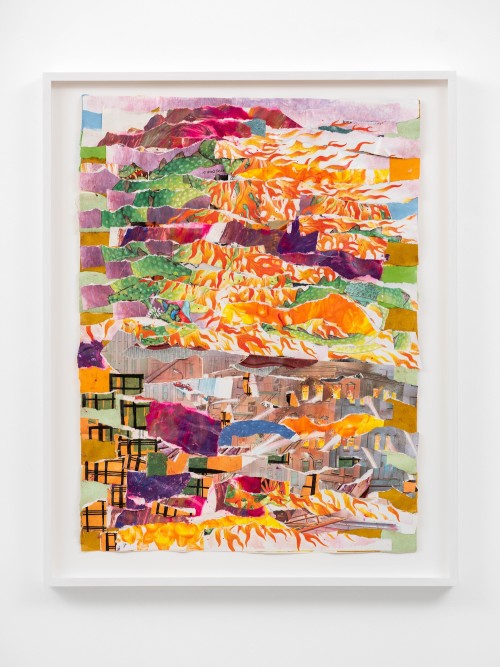 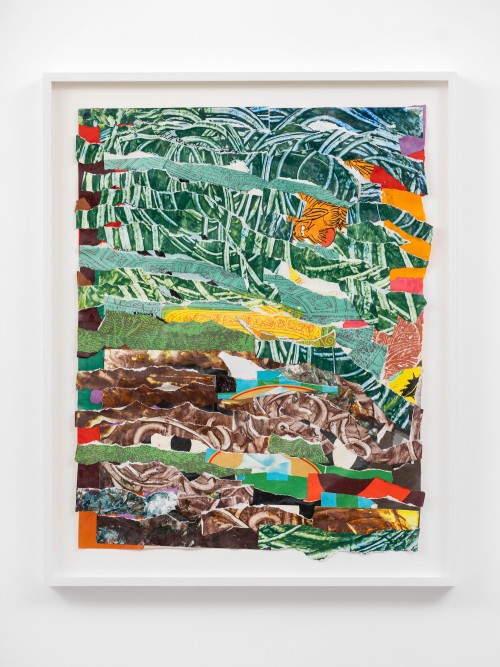 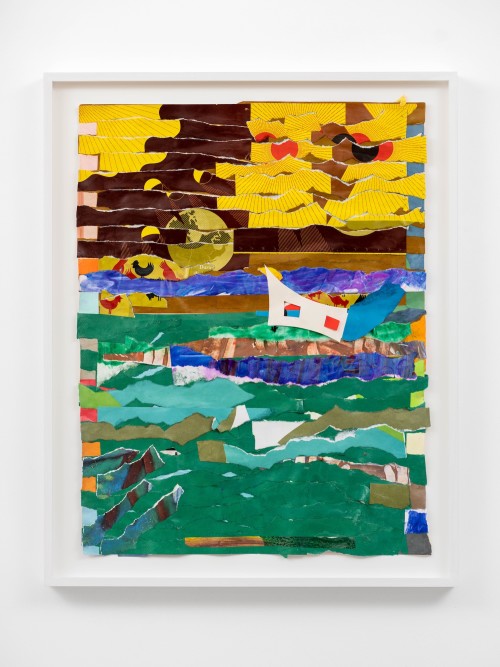 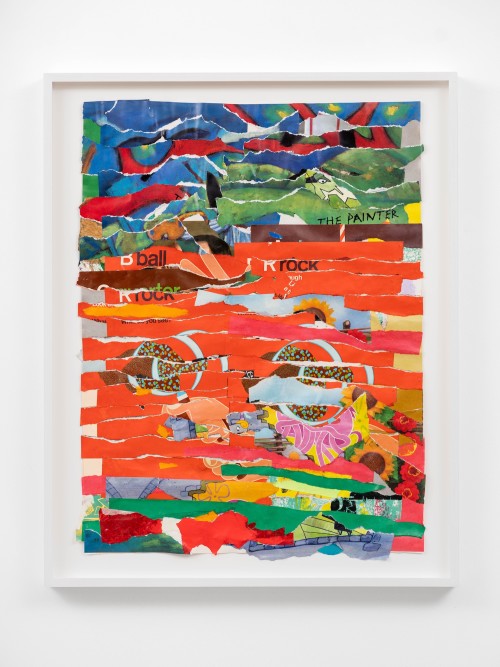 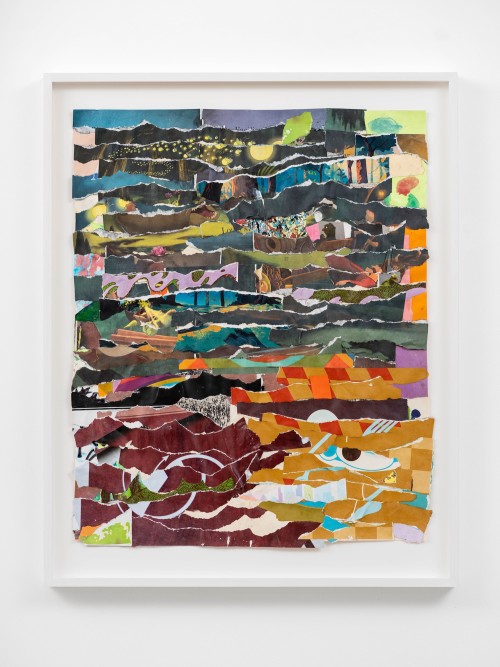 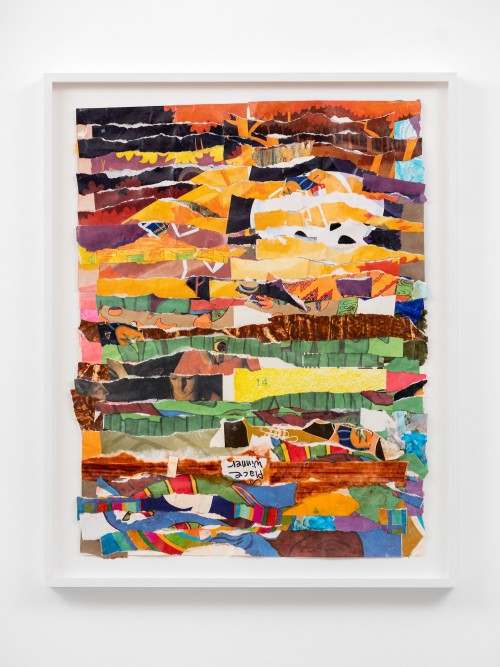 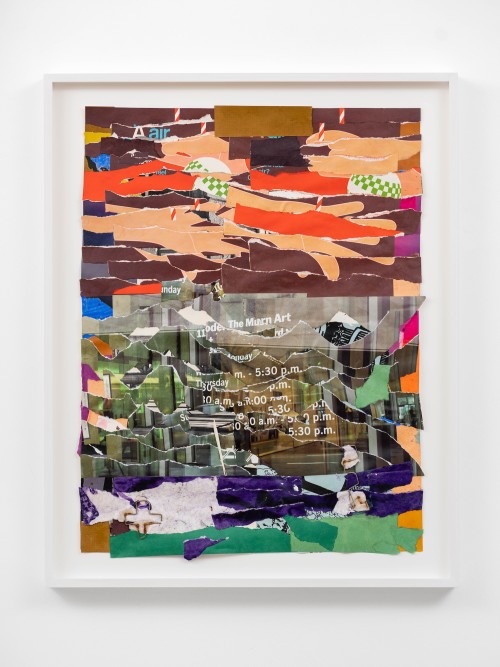 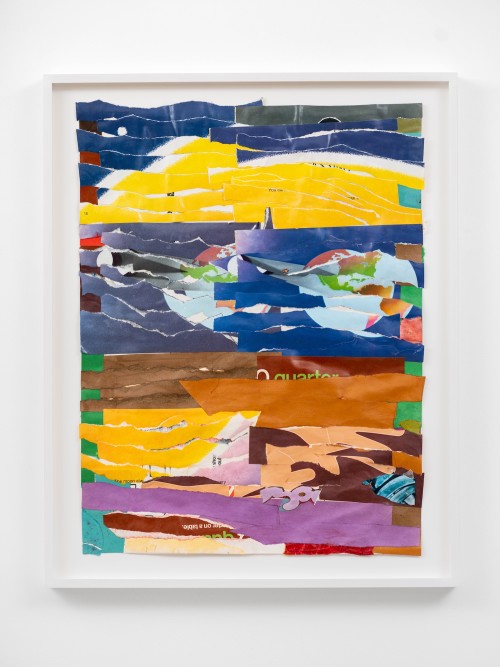 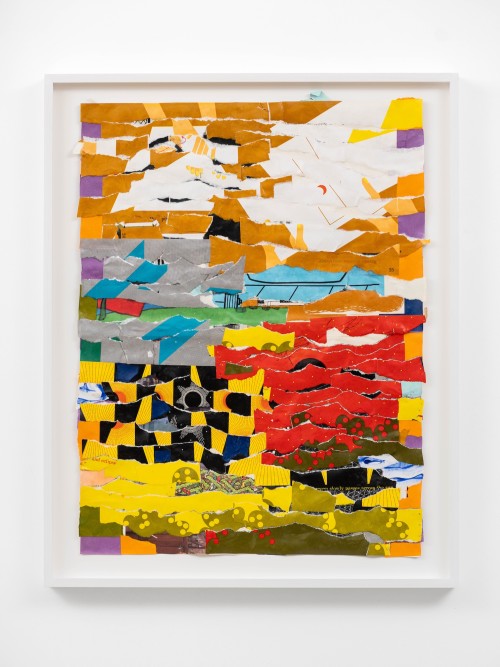 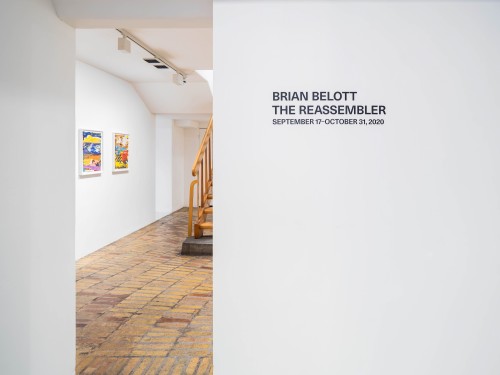 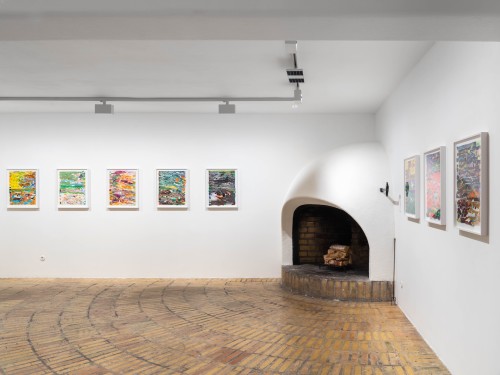 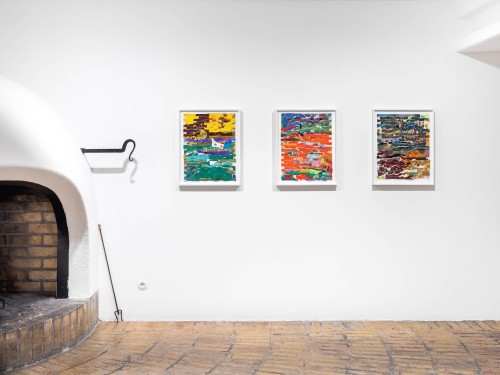 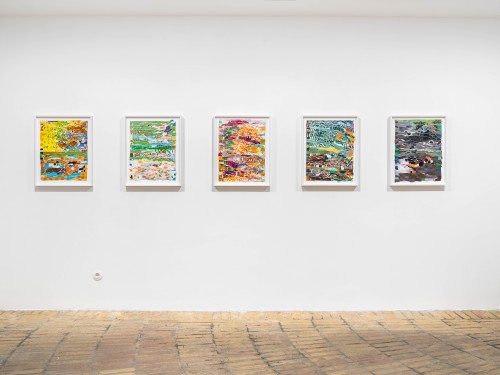 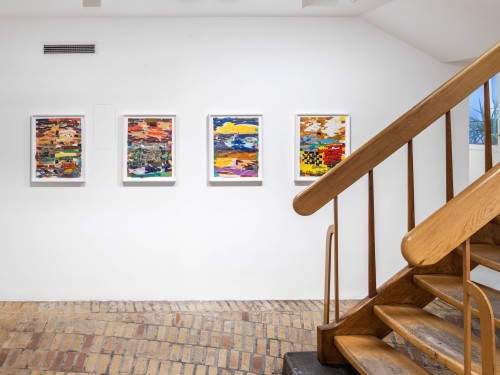 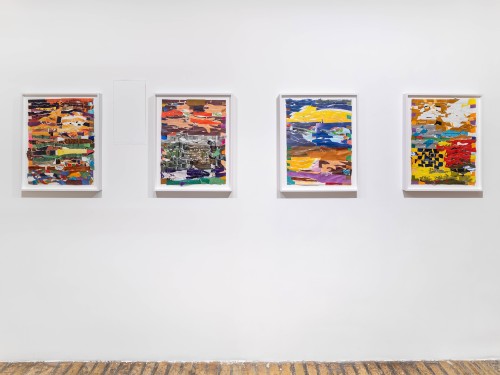 The idea, insofar as it was an idea, was simple: Dive into the bins behind a business and retrieve a few bags of shredded documents. Jump in a waiting car, haul ass. Upon returning home, feed the strips of paper into “the reassembler” and watch as the machine stitches the portfolio back together. Once the work is complete, sell the restored pages back to the business.

Brian Belott’s late father dubbed this invention “The Reassembler”; while it was never realised (firstly, because it was impossible; secondly, because it was a joke), its name and process of material reconstitution are memorialised in the New York-based artist’s latest exhibition at Loyal. The show features a series of collages made from ripped strips of source books and printed catalogues from the 1970s. While the colouring and configuration of each individual work hints at a recognisable scene – The Reassembler 2 reads like rain on an ocean; The Reassembler 3, a lazy day in the park – the rough irregularity of the strips ensures that the scenes only ever approximate that which they resemble. Likewise, the fragments of lettering and imagery that remain visible on the strips: a barcode; the word ‘magnet’, twice; a graphic of the Earth; what might be a tiger but probably isn’t. Just as Belott’s compositions allude to legible landscapes without fully committing to them, so too do these printed artefacts hint at histories without ever telling them. This is, to use Belott’s words, “hide and seek” – “or someone peeking out from leveller blinds”.

Combination, reconfiguration, confusion: each plays a vital role here, for Belott is a great assembler of things. (“Everything is about fusion”, he noted in 2017.) Throughout his career, he has playfully situated dissimilar objects, ideas and found oddities alongside one another in order to see what they might create. Box fans and cotton balls; collections of children’s books; found calculators bejewelled with stones; cats with clocks for eyes: Belott’s is a dadaist campaign intent on making ordinary things as weird as they can be and, in doing so, create a new kind of (wholly illogical) logic. “Not being precious is something I feel I’ve carried throughout my life”, Belott once said, “purposely doing something stupid to see how it can rebalance.” Because the stupid is only stupid until it’s not stupid anymore, until it rebalances and starts to make a bizarre kind of sense. Rip it up, start again, see what you’ve got: a policy of endless revision that feels oddly familiar to the passing of people through life.

“The inevitability of its destruction creates more creativity”, Belott says, and there is surely a destructive, a punkish quality to this process of cut and paste and paint all over: a playful lack of respect for the intended uses of the objects that he turns his hand to. It is a roguish irreverence that informs, or is informed by, his derisory relationship with the conventions of art making itself, something exemplified by his tendency to eschew traditional presentation methods and damage his own work (the two candle collages on display at Loyal will eventually burn themselves out), and his frequent references to, and uses of, ‘techniques’ that are often associated with children. Finger painting, scribbling and, in the case of “The Reassembler”, rip and stick collaging, the type that any elementary school child will be familiar with. Belott’s petulant refusal to reject such “primitive” forms of making chimes with his refusal to acknowledge the authority of the institution that is contemporary art. There is no hierarchy, here. There are simply things to be ripped up, reimagined and reassembled once again.

Brian Belott’s work is part of the permanent collection of the Museum of Modern Art (New York) and the Whitney Museum of American Art (New York). Belott first exhibited with LOYAL in 2005 and this marks the eighth time we have worked together at the gallery.