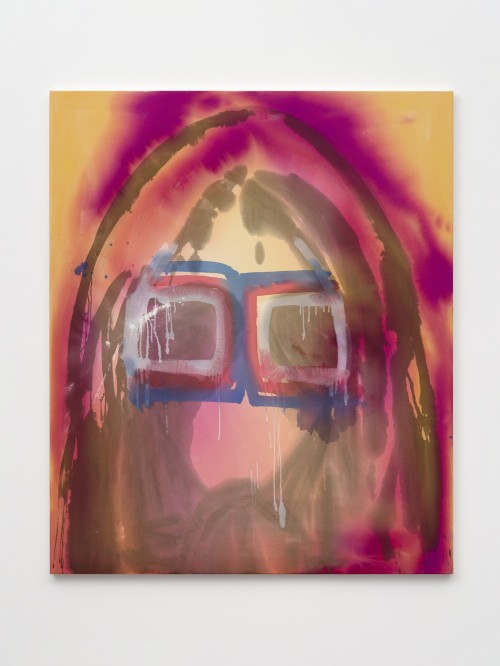 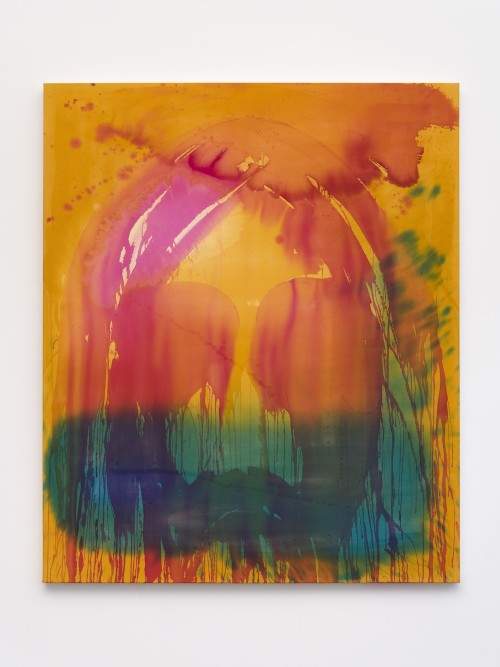 Loyal is proud to present Liz Markus, “This Might Go On Forever” opening at Loyal on Thursday, August 18, with a reception from 5–8 pm in the presence of the artist. This is the artist’s second solo exhibition with the gallery. Introducing the exhibition further is writer Kevin Kwan with the essay “Rebel Spirits” on Liz Markus’s upcoming exhibition.

There is a building by the water’s edge in Galveston, Texas where a mysterious phenomenon occurs. Building #71, Ewing Hall on the University of Texas Medical Branch campus. If you stare long enough at a specific wall, a face becomes visible within the concrete façade. When it was first noticed decades ago, university officials at first tried to dismiss it as a trick of the eye, a random stain on the concrete, but it is very obviously a face—a man’s face—with contours and shading worthy of a Rembrandt etching. Everyone seems to see something different in the face. Some say it resembles a Krampus, some say it’s the man who owned the land on which the university is built, some say it looks like Kirk Douglas.

I am standing in the studio of Liz Markus in downtown LA, looking at all the canvases placed around me. This is no trick of the eye, these paintings are real. They confront you like David Bailey portraits refracted through a Morris Louis kaleidoscope. They hypnotize like apparitions, they pulsate with their own kinetic energy, their expressions shift with the light, they draw you in like vortexes into a parallel universe, they take you back, they take you forward, they take you on a ride on your 1952 Harley down a long desert highway cool wind in your hair as you catch a wave on the Banzai Pipeline or Zuma Beach or Puerto Escondido and wipe out into a tequila sunrise like the day glo ice cream bombs of a melted summer of love and late nights at Chateau Marmont and early jam sessions in Laurel Canyon and long VHS freeze frames on Jordan Catalano and his long floppy hair long before his Gucci Jesus phase long after we all went slouching towards Bethlehem towards Rishikesh towards Bali tuning in dropping out to the electric kool aid shimmy of the Lizard King.

Back in my high school days, kids would get stoned or drunk or both and ride down the Gulf Freeway to this island on the coast in search of the haunted building by the water’s edge. “Let’s go see the face,” they would say. It was a rite of passage, a badge of honor to sneak onto the grounds of the campus and get as close as possible to the face. It became such a popular attraction that one day two women trying to look for the face drove their car into the water by accident. After that, the university officials put up fences and sandblasted away the face from the concrete panel. The face promptly reappeared on another part of the wall, lower down. They sandblasted it again, but again the face reappeared on a different part of the wall, like a giant fuck you to the officials.

Liz and I have tacos in her studio after I look at her paintings. Sometimes we go to a diner in Los Feliz for cheeseburgers and fries, sometimes we go to a bistro in West Hollywood for crepes, sometimes we go to a place in Beverly Hills where you have to call a VIP number on a card to get a reservation so that you can enjoy the legendary garlic noodles, a recipe so fiercely guarded the chef has to prepare the dish in a special walled kitchen within the kitchen of the restaurant with no windows, only a small opening where they would slide the dish through so that the other staff cannot see how these sumptuous noodles are made. Only one person knows the secret. I want to ask Liz about her paintings, I want to ask, “what is your secret?” But I don’t. All I know is that she has a thing for icons. She plays with them, subverts them, twists them around her pinkie finger and manifests them as these color field explosions. Whether it’s Nancy Reagan or Jackie O or Babe Paley or Baby Godzilla or The Dude, she strips these icons of all their accoutrements and pares them down to their elemental truth. But she never reveals their secrets.

One day in 1993 my friend Stephen drove me down to Galveston. He knew a secret way to get onto the campus and find the building. In the mid-afternoon sun, I looked up at the flat gray wall, squinting into the bright glare reflecting off the concrete, trying to see the face. I stood there staring and my pulse started to race, just like it did the day I stood in front of Bunny Mellon’s Rothko studying the colors shift or the day I stood in Donald Judd’s artillery shed in Marfa watching the light move across a hundred aluminum boxes or the day I stood in the Palazzo Fortuny transfixed by Yun Hyong-Keun’s portals of Burnt Umber and Ultramarine. My friend kept asking, “Do you see it? Do you see the face? What do you see?”

Liz Markus (b.1967, Buffalo, NY) lives and works in Los Angeles, CA. Markus earned her MFA from the Tyler School of Art in Philadelphia in 1997, and her BFA at School of Visual Arts in New York in 1989.

For “This Might Go on Forever”, her second solo exhibition with Loyal, Liz Markus presents a series of paintings further exploring a place where color field painting meets iconic, reduced figuration. The exhibition revolves around the subtle presence of a hippie figure, demarcated by long hair, a heavy beard and mustache, sometimes with aviator sunglasses, abstracted in bold, colorful washes of wet into wet acrylic on unprimed canvas.

Kevin Kwan is a Singapore-born American novelist living in Los Angeles and the author of Crazy Rich Asians, the international bestselling novel, along with its sequels China Rich Girlfriend and Rich People Problems. The Crazy Rich Asians trilogy commanded the top three positions of the New York Times bestseller list in 2018, and was adapted into the highly acclaimed film of the same name.