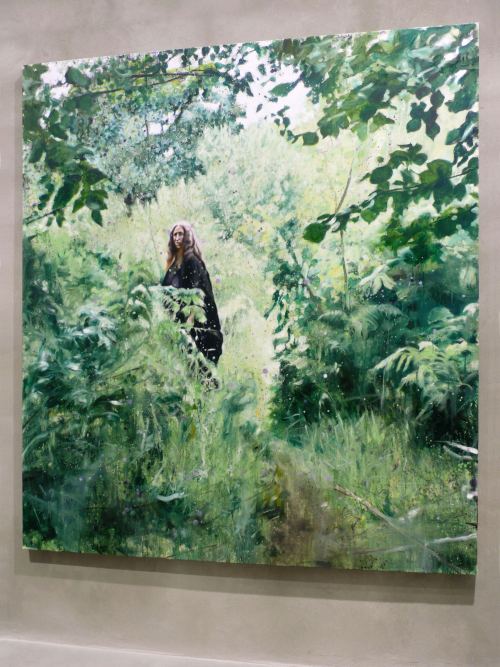 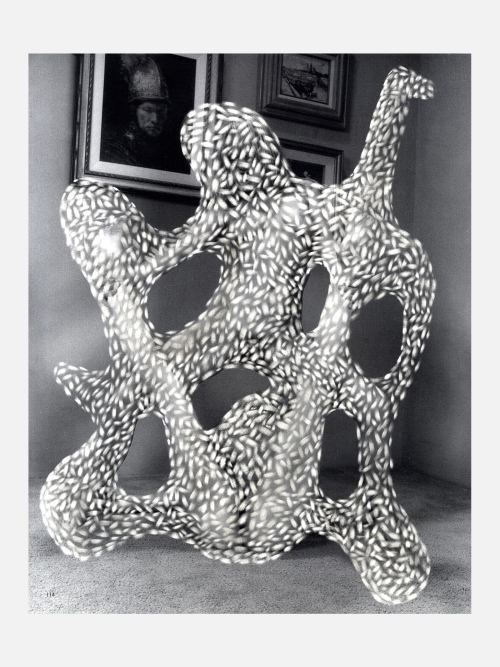 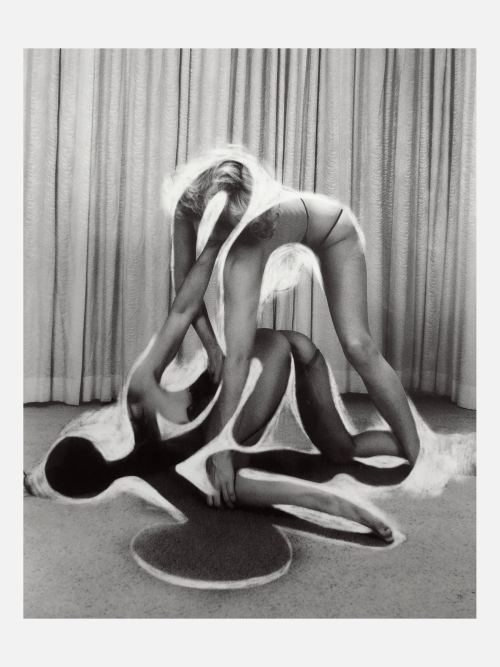 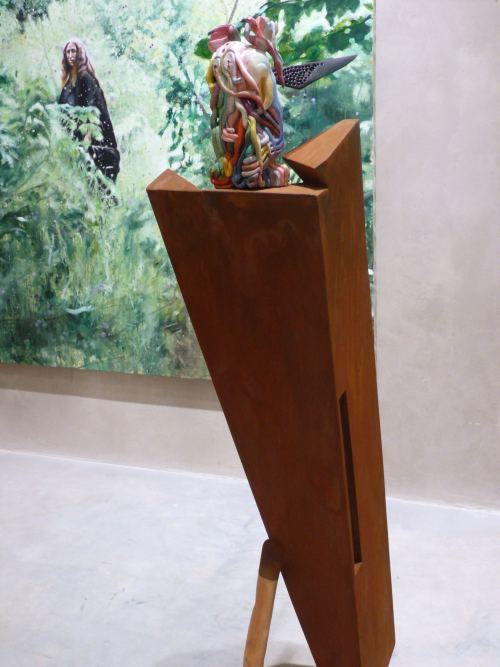 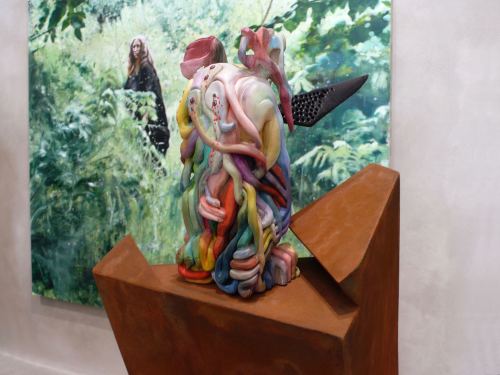 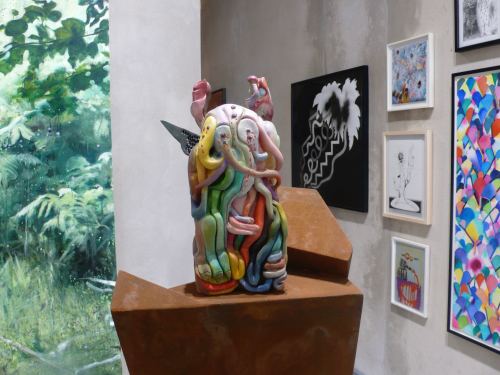 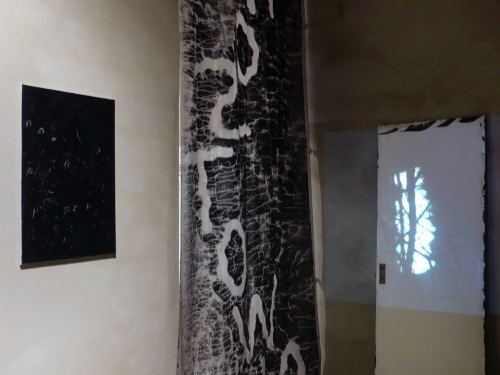 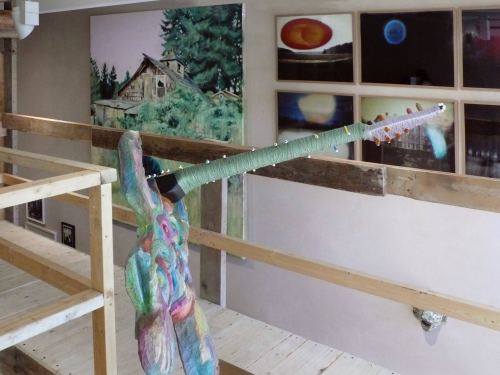 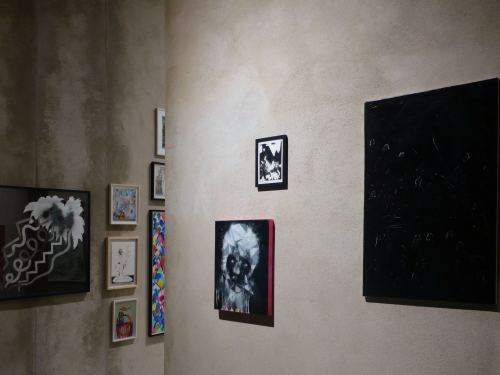 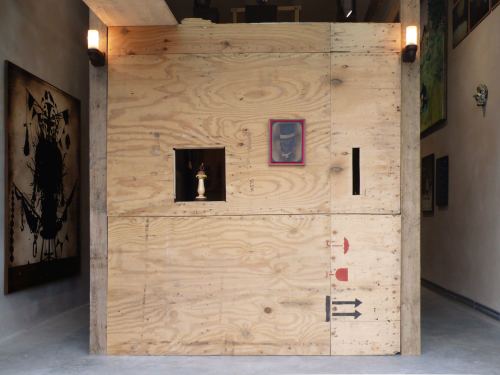 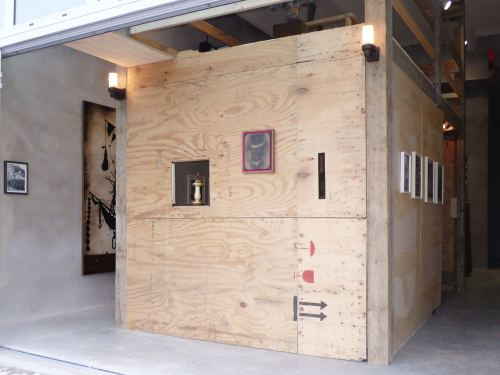 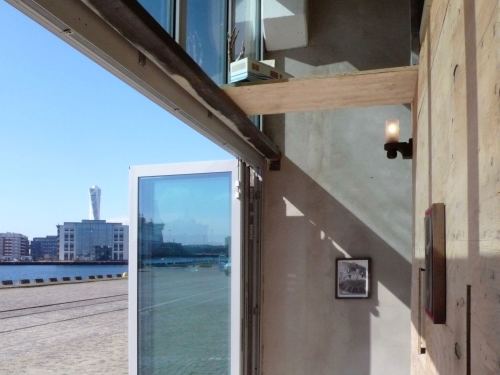 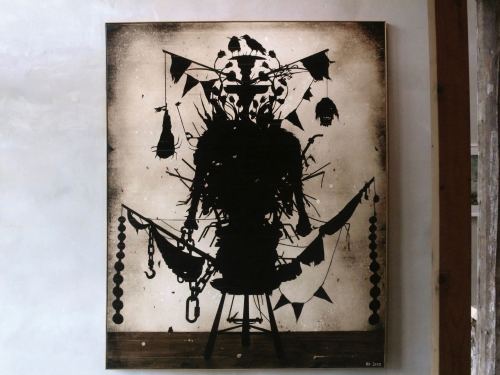 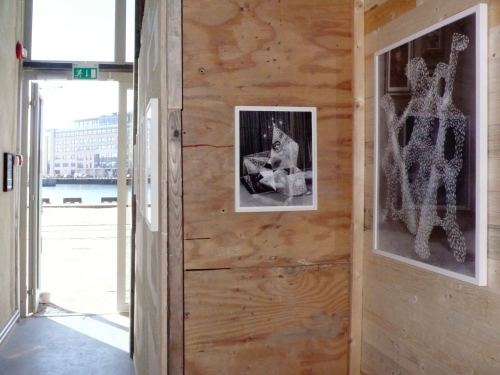 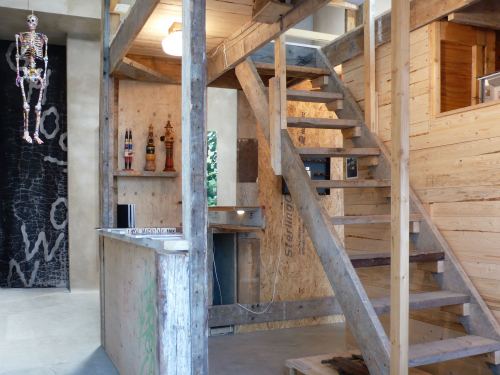 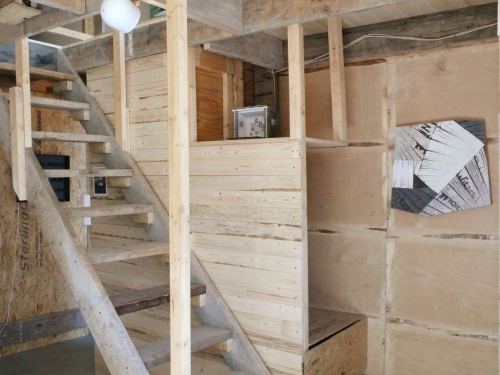 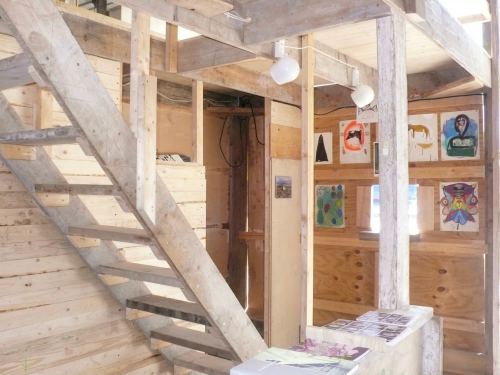 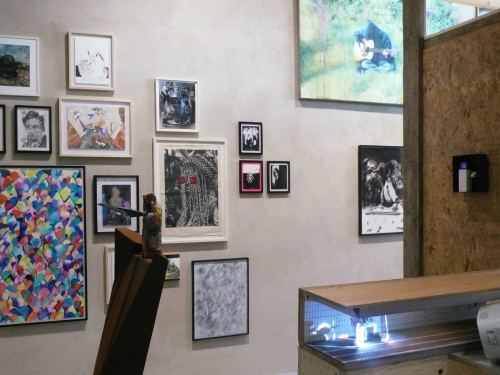 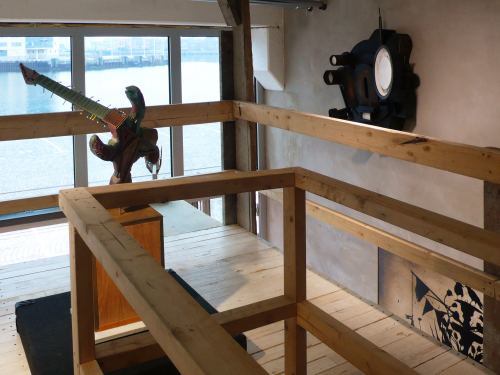 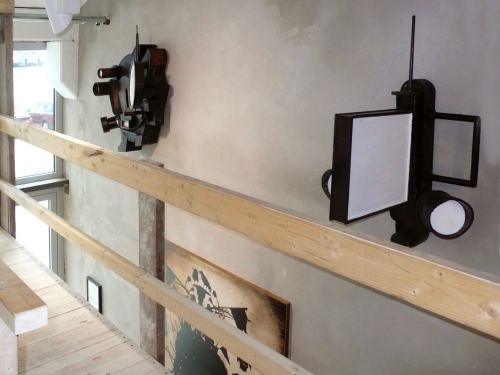 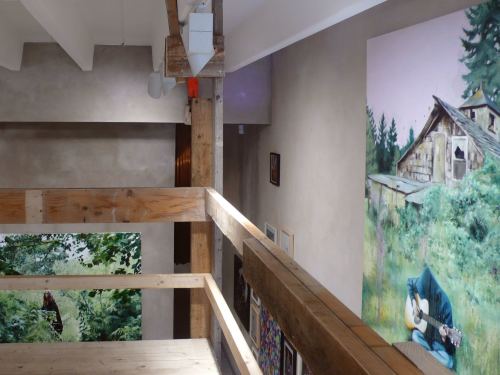 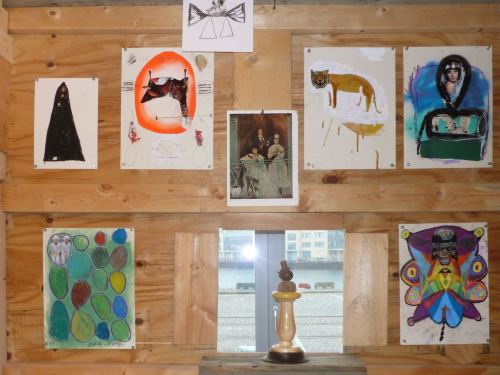 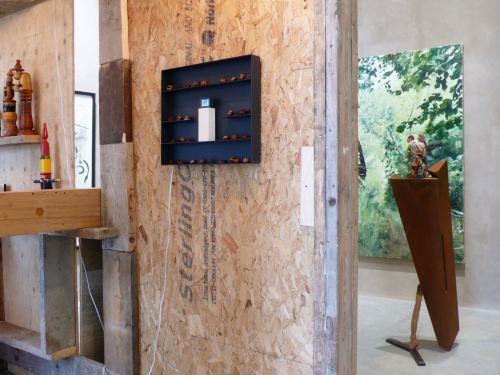 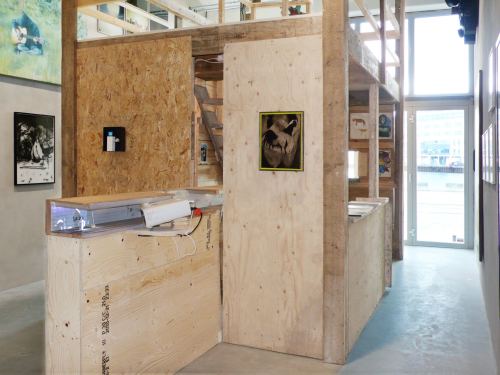 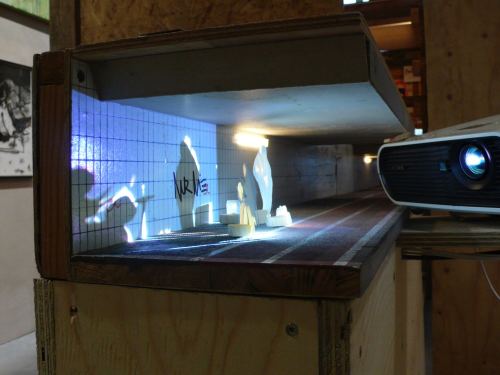 Curated by Till Gerhard

The pine forest is located at the highest point of the Black Forest, and at that time in that area there was no village in a two hour radius, not even a hut, because superstitious people thought it was unsafe there. They also claimed that, so tall and glorious were the pine trees there, that often when the wood-cutters worked there, the trees fell over so quickly that they knocked the men over and hurt or even killed them. And that one must use even the most beautiful trees from that pine forest only for firewood, because the boat builders never took a piece of that pine wood, not even for a raft, for the story goes that “man and wood crash when pine meets water”. And so it was, that in the pine forest the trees were so thick and so high that during the day it was like night, and he felt it was very scary there, for he heard no voice, no steps except his own, no ax, even the birds seemed to avoid the dense pine night.

When the story came out, this Michel was nowhere to be found, but he is not dead. For a hundred years, his ghost has run through the forest, and it is said that he already had a lot of help to be rich, but at the expense of his poor soul, and I will not say more. But this much is certain, that he is still in the pine forest on those stormy nights seeking out the most beautiful pine trees that one should not cut.

Emotionally excessive love of order and attention to details of a so called “beauty” also provided for the ever and ever draining of living things. There it lay on the ground. Broken into small and micro parts, crumbled beyond recognition. A lightless soul coal pile. “This,” he replied, and handed him out of a drawer, “a heart of stone”. But no sooner had he said this, when Glass-man grew and swelled and was high and wide, and his eyes should were as big as soup plates, and his mouth was like a heated oven, and flames flashed out of it. He threw himself on his knees, and his heart of stone did not protected him, not from his limbs trembling like an aspen. With vulture talons the Forest Spirit grabbed him by the neck, swung him like a whirlwind of dry leaves, and threw him to the ground so that it cracked all his ribs! “Earth worm,” he shouted in a voice that rolled like thunder, “I could crush you if I wanted, for you have sinned against the Lord of the forest. But for this dead woman’s sake, she who has fed and watered me, I’ll give you eight days grace period. If you have not turned for the better, I will come and crush your bones, and you will go down in your sins.” /TOTHOLZ

Olaf Fippinger (1965 in Osnabrück, Germany) Lives and works in Hamburg. 1988-1993 Muthesius Academy of Fine Arts and Design (Hochschule für Kunst und Gestaltung), Kiel. 2001-2002 Scholarship at the USF / Bergen, Norway. 2008 “Unterhosenkongreß” NS-16 Tilburg, Niederlande. Olaf Fippinger is a composer, photographer and filmmaker. He was a guest student of John Peel from 1980-1987 before attending art school in Kiel. He now is a guest professor and lecturer of photography at Hochschule Wismar, Germany. Exhibitions include øy Symposium, Radøy, Norway, USF, Bergen, Norway, as well as Wartezimmer, Galerie XY, Kunstverein Buchholz, and Künstlerhaus, Hamburg.

Till Gerhard (1971 in Hamburg, Germany) Lives and works in Hamburg. 1993-1998 University of Applied Sciences (Hochschule für angewandte Wissenschaften), Hamburg. 1992-1993 Muthesius Academy of Fine Arts and Design (Hochschule für Kunst und Gestaltung), Kiel. In his large scale oil on canvas paintings Till Gerhard explores the tension between civilization and nature in idyllic nature scenes which have an unsettling atmosphere. With delicate spills, drips and explosions of color as well as heavy brushwork and smears, Gerhard depicts a nature world of mystery, fear and euphoric beauty. Imagery includes a figure leading us into a dark wood, or the morning after a festival, calling to mind the desire to be free of society and commune with nature and other humans which often descends into depravity. Till Gerhard has exhibited widely internationally including Stellan Holm, New York, Galleri K, Oslo, San Francisco Museum of Modern Art, Hamburger Kunsthalle, as well as Galerie Michael Janssen, Berlin and Patricia Low in Gstaad, and LOYAL in Stockholm and Malmö.

Henning Kles. Born 1970 in Hamburg, Germany. Lives and works in Hamburg.
2000-2005 Academy of Fine Arts (Hochschule für bildende Kunste), Hamburg
1993-1998 University of Applied Sciences (Hochschule für angewandte Wissenschaften), Hamburg. In his canvases Henning Kles unfolds hallucinatory narrations characterized by toxic coloring and ghostly figures arranged in anti-idyllic landscapes. Positioned between abstraction and figuration, Kles draws from a wide range of artists and genres, mingling art history with mass and pop culture. His work has been exhibited in solo and group shows in Germany, Switzerland, and the US. Most recently, he is working with a variation of Bitumen, a tar-like liquid he applies onto a surface. The final image is worked out in a subtractive process.

Tilman Knop. Born 1965 in Hamburg, Germany. Lives and works in Hamburg.
2006 Academy of Fine Arts (Hochschule für bildende Kunste), Hamburg
1988-1994 College of Art and Design (Studium der maleri und Graphik) Hamburg
Tilman Knop is an artist working in many mediums, silkscreen, oil painting, small objects and large scale installations. Knop often brings a sarcastic undertone to the contemplation of allegorical symbolism. For many years, Knop has introduced small sculptural works into the environment. These “vehicles” are produced on a small scale and carried far out into the wilderness. On long walks through the tundra, or deserts, he discards them. These devices are dysfunctional. Sometimes scientific and often equipped with wheels, they need to do nothing more than to work the imagination. They simply stand there, in a size and meaning that is relative to its surroundings. On trips to Scandinavia, Iceland and Greenland, the vehicle is taken in his backpack to areas not often visited by humans. After finding an ideal location, it is photographed and finally left there. Exhibitions include in Dusseldorf, Frankfurt, Cologne, Berlin and Bremen, as well as in France, Belgium, Norway and the USA among others.

Jan Köchermann. Born 1967 in Lüdenscheid, Germany. Lives and works in Hamburg. 2010 Berlin Art Prize, Academy of Arts Berlin. 1994-1998 Academy of Fine Arts (Hochschule für bildende Kunste), Hamburg. 1996 Semester abroad at Faculdad de Bellas Artes, Madrid. 1990-1994 University of Applied Sciences (Hochschule für Angewandte Wissenschaften), Hamburg. Jan Köchermann since 1996 deals with the sculptural element of the shaft. In recent years the artist has created several large installations in public spaces, two in Hamburg: A wharf in the port of Hamburg City, he had set a 7-meter-long shaft off of the exhibition space towards the Elbe River (2002) and in 2006 he built a real pedestrian underpass at the Alster Lake in the city north as sculpture. Since 2006 Jan Köchermann also developed light sculptures for interior and exterior, as well as model-like interior sculptures with film projections and light projections.

Stefan Marx, Born 1979 in Schwalmstadt, Germany. Lives and works in Hamburg.
2002-2007 University of Applied Sciences (Hochschule für angewandte Wissenschaften), Hamburg. 2009 Lichtwark Stipendium. Stefan Marx navigates a fine line between irony and beauty and his work spans a crossover between DIY Culture and Fine Art. Marx is deep in the skateboard scene, and is also inspired by graffiti. His medium is mostly drawing, which is often something simple, almost childish one moment and then more elusive and mysterious the next. Represented by Feinkunst Krüger in Hamburg and exhibited in Germany, London, Paris, Zurich and Barcelona, has published a series of limited edition books containing his drawings, and mounted a major exhibition at the Kunstverein in Hamburg last year.

Heiko Müller. Born 1968 in Hamburg, Germany. Lives and works in Hamburg.
2000 University of Applied Sciences (Hochschule für angewandte Wissenschaften), Hamburg. Heiko Müller’s paintings tap into the lines linking religious icon art, renaissance painting and comic culture. His fascination with the kind of spiritual terror one finds expressed in the paintings of the old Flemish masters is apparent in his recent work, portraits of animals with an eerie, apocalyptic mood. Müller explores what happens when that dark mood is applied to the serene and harmless world of rural folk art. In his own words, “Once I’m face to face with a lovely scenery, I feel immediately tempted to find out what it’s concealing. The dark goings-on behind the façade of nature or the hidden machinations of the animal kingdom.” Represented by Feinkunst Krüger in Hamburg and exhibited widely internationally in Estonia, New York, Paris, Saint Petersburg, Los Angeles, Seattle and Chicago.

Thorsten Passfeld. Born 1975 in Dinslaken, Germany. Lives and works in Hamburg. 1997-2002 Academy of Fine Arts (Hochschule für bildende Kunste), Hamburg. Wood is the material with which Thorsten Passfeld constructs his wall objects, sculptures, installations and even whole houses. Passfeld initially studied painting, however he felt an urge to go beyond the visual and was drawn to a material he could use to develop larger structures. In 2002 Passfeld began a series of wooden houses Haus aus Holz (Wooden House). The first was built behind Reeperbahn in Hamburg. The artist built these houses himself and they stood in public spaces as temporary sculptures that could be accessed and utilized for social events. He continued to build: a full scale church “Kirche des Guten Willens” (Church of Goodwill) in Wilhelmsburg area of Hamburg and Düsseldorf, a theater “Vier Linden Royal Theater” in St. Georg area of Hamburg, “Zum Falschen Freund” (To a False Friend) at Kunstverein Buchholz and Hafen City-Hamburg, and a 1:1 replica of the legendary Oberhafen canteen in Hamburg. Other major works include “Play with the Big”, an environment and large scale installation commissioned by Art Basel Miami.

Jörn Stahlschmidt, Born 1975 in Hamburg, Germany. Lives and works in Hamburg. 2006-2007 Academy of Fine Arts (Hochschule für bildende Künste) Hamburg. 2003-2006 Academy of Fine Arts (Hochschule für bildende Künste) Hamburg. 1998-2003 University of Applied Sciences (Hochschule für Angewandte Wissenschaften), Hamburg. 2002 Workshop Rietveld-Akademie Amsterdam. 2001 Harvard University, Cambridge, USA, Exchange with Graduate School of Design, Landscape Architecture. Jörn Stahlschmidt asks ubiquitous questions concerning current ways of social life in western pure capitalism. As an example he built “Wohnparasit“ (Habitation Parasite), a pale white form on a lamp on the wall that can be assembled everywhere just to consume water and electricity and can only be removed violently. In 2005 Stahlschmidt did the work “Protoganda“, a huge, pulpit-like formation on the wall with loudspeakers and microphones. There is no way to ascend it and so it is doomed to stay idle. Stahlschmidt points at the impossibility of society which is pseudo-functioning and shows emptiness and senselessness.