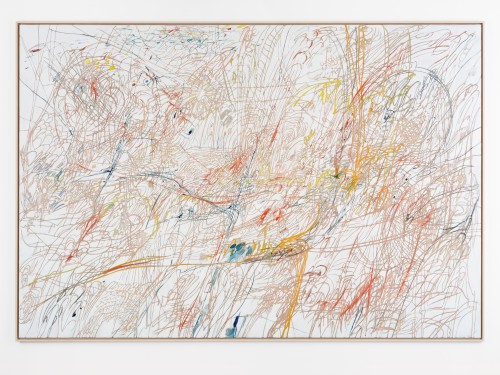 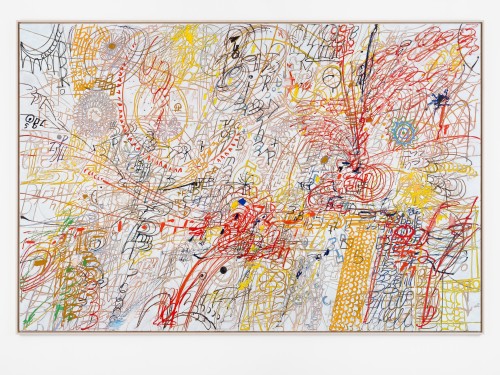 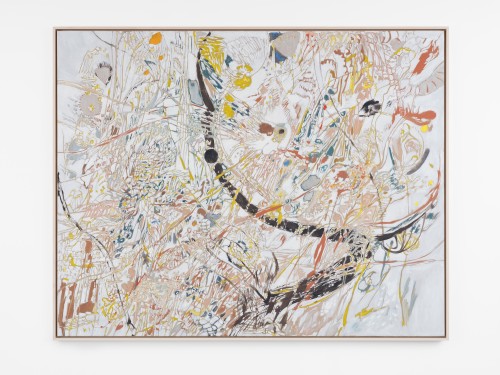 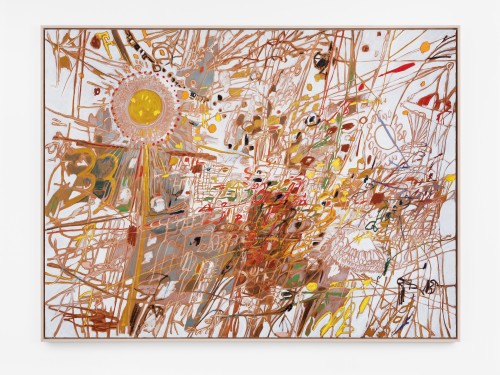 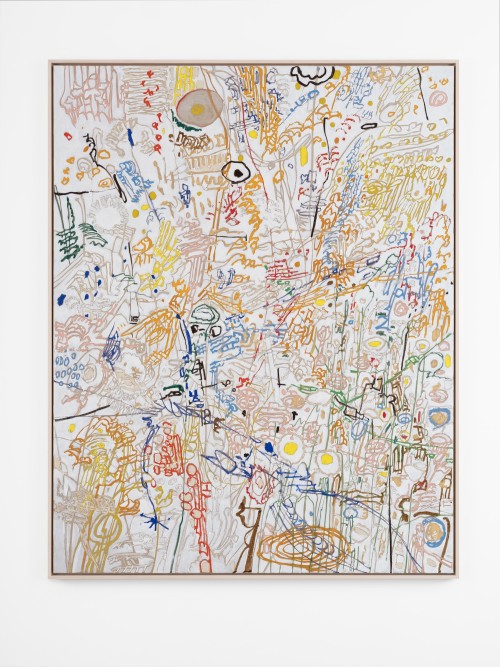 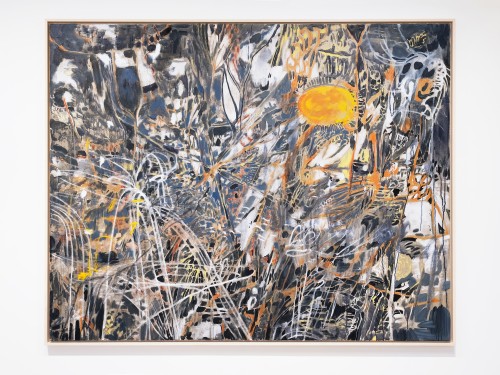 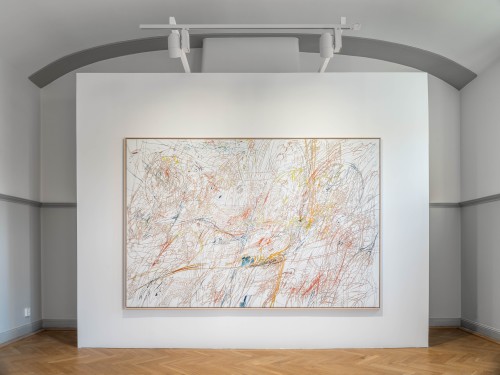 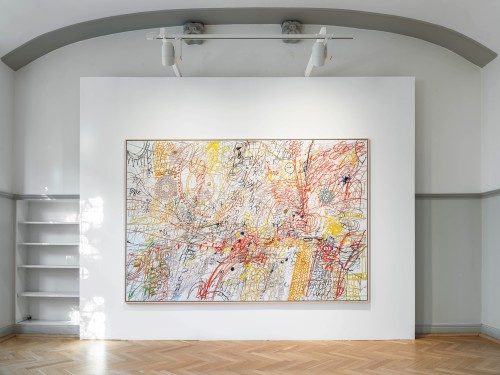 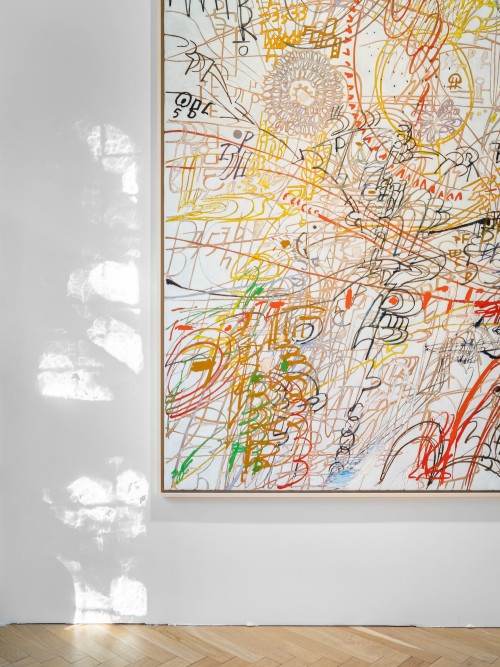 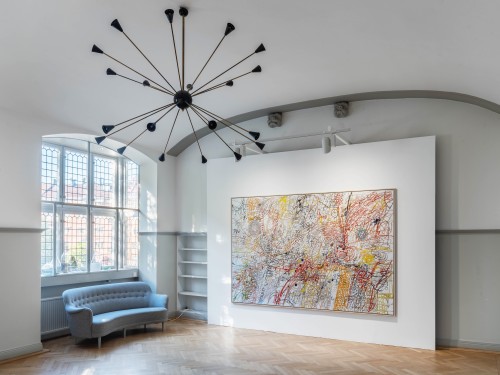 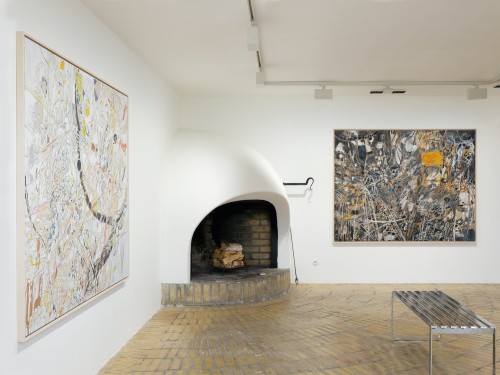 I read about a head being distorted after a tough title match. I only read the headline because I hate context. (Don’t think with your body. Lesson number one. I obey that one.) I walk by some communists who are also armchairs, of cold stone. I get a sign from god while listening to a podcast about telepathy: a car drives past and the plate says TAO. I’m scared and I laugh a petite laugh. It feels kind of funny, to describe laughter like that. Okay, it’s basically two big paintings and me in the middle. Jim Thorell sits in an armchair (cold stone? no, corduroy) in his studio and talks about a container filled with dried pineapple. The painting I call the first one or the gray one or the more “human” one or the one full of tainted (tied?) tissue or the one whose treacherously soft appearance crushes me, is actually called Billowing Beloved Angel, 2020 and that of course makes sense. “I thought she had sepsis.” (In my day, we always said blood poisoning. We said blood poisoning all the time. Editor’s note.) Remove: tainted (tied?) tissue. From the text/the body (fragment: consider revising, consider alienation). Half the side was like dead, or not dead, but it wasn’t alive. Not there. It wasn’t alive in there. Like limbo in the torso, you know, I don’t know. This specific matter is merely required in the painting. Maybe not even there, I don’t know: the hopelessness and the skew and the beauty of the retroactive shade of the tribute. Remove. Jim Thorell sits in an armchair and we’re talking about bacteria followed by Ketamine. The greatest love of all. New order, nerve fibers, systems: an unanchored place. Choreography of pragmatism, negotiations in the white. All that stuff. A fresh level of detail? Is it necessary to elaborate a fresh level of detail? With a little help from repetition and an Orpheus gaze back at the “old drawing days”? Maybe fish skeletons/seashells/shoulder blades appear. “The shoulder blades’ collective sense of guilt”, it’s a failed/tragic pun of mine, impossible to translate. The motives take off and appear on stage. Two kids directing a minor drama. Shade and cluster. (My cyst is mere a ball, sorry, I started thinking about an old mantra.) In an ancient novel I’ve described the destruction of the painting as massage. This feels possibly creepy. I’m in-between. I’m trying to wrap my head around things. Big movements. Bodies grow, you know, I don’t know. Like a distorted cypress, too twisted. At least try to prevent the false impulse they call “seeing patterns”. Then there’s the other one, Babybrain Cellular Graft, 2020. Mechanical chaos. Circle, an eye, gears, bullets, virus? You can read the entire alphabet if you’re stupid. Jim Thorell sits on corduroy and he says: I paint everything. His tools are constant. Limitations are architecture. He worked as a day laborer in Gothenburg, maybe 2003? A container containing twelve tons of dried pineapple predestined to be muesli in the Axa factory. He found a note written in Thai. That he couldn’t comprehend felt amazing. Text as doodle, I dare you: try not to read. Thinking about a baby’s brain, I don’t know, you know, but does it capture the breath-taking feeling of an omen? These words: intensive, care. The emphasis of handwriting’s unique aspects is possibly banal but it “feels forensic”. Small movements, never adjust. Petite laughter, never adjust. Tiny tears, never adjust. I believe in negative chance. I believe in a head being distorted after a tough title match (the fighter’s own words: Holy moly, I look like a zombie). I’m a believer and I cry. Nobody should intervene in your work. If you drive a car for example, crutches should be avoided, at all costs! I think about the kids who didn’t need crutches, what they used to do, if they stole crutches. Everything they did with those pointless crutches was mesmerizing. This is a parenthesis, not a metaphor for painting… this is just a literal act of bragging, you know, I don’t know. Technology equals authority. Motives equal happy beginners. And then I wonder, why the beginner is so happy? The universe is endless and empty. Embrace it. Laughter. Sending out communiqués about deceiving death is tricky. Celebrity language. Different triumphs work in different ways. Jim Thorell says: I have realized that I have begun to fetishize austerity. Some things really look like a society. Adorable rituals of crucial monotony, bloodstreams… it isn’t automatically alienating, not all the time. No trauma, maybe trauma, but it continues… it’s possible to search, with light and lantern, the same old tools (plus scalpels?), for a new kind of calm. Symmetrical stars. She survived. Billowing beloved angel. Secret codes from parents who aren’t working are starting to appear on asphalt during this pandemic and it’s beautiful to see. In the hand a small kid’s hand and in the picture the shadow of a small kid holding the hand. Master class. This is what a master class looks like. The friend enters the studio and starts talking about Lord of the Flies. I’m going to write about that. Who was the real lord of the flies? An evil kid or a drug dream? Suddenly a number appears. I write it down. A sign from god. A bullet or a fist? The more I think about it, it’s a fist. Irregular structures of insect wings approaching the state of taboo. Creep closer. Start walking with your kid. Embrace an over explicit identity. Shoot your kid’s shadow in the tarmac. It’s not the calm before the storm; it’s the calm after. For once.

Vinden is Jim Thorell’s second solo exhibition with the gallery and is a continuation of the body of work first shown in his solo presentation with Loyal at Market Art Fair in Stockholm 2019.

The works in Vinden came out of the energy released after a time of shock and its after effects, a state the artist calls trauma tranquil. This state of standstill and time slowing down was then echoed on a large scale as the world found itself grinding to a halt with a pandemic.

Full of emotional intent, the works in Vinden are a direct and communicative way of addressing a mental state. “It’s about pacing with tragedy. Things you can’t rush. I’m constantly wishing for speedy recovery or more time and neither is available. So I have to pace myself, and society as a whole has to pace itself.”

The show centers around two large oil paintings. In Billowing Beloved Angel, there is serenity in the seemingly endless details. Babybrain Cellular Graft is more of a reflection of something ongoing and chaotic that keeps evolving, like an open-ended situation that has been reified.